Following the accident at the Fukushima nuclear power plant in March 2011, the Japanese authorities decided to carry out major decontamination works in the affected area, which covers more than 9,000 km2. On December 12, 2019, with most of this work having been completed, the scientific journal SOIL of the European Geosciences Union (EGU) is publishing a synthesis of approximately sixty scientific publications that together provide an overview of the decontamination strategies used and their effectiveness, with a focus on radiocesium. This work is the result of an international collaboration led by Olivier Evrard, researcher at the Laboratoire des Sciences du Climat et de l’Environnement [Laboratory of Climate and Environmental Sciences] (LSCE – CEA/CNRS/UVSQ, Université Paris Saclay). 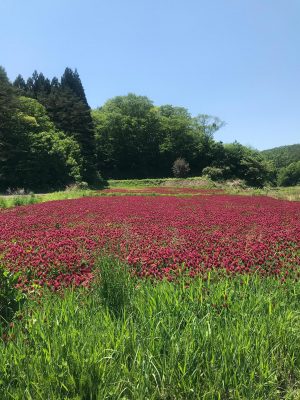 Soil decontamination, which began in 2013 following the accident at the Fukushima Dai-ichi nuclear power plant, has now been nearly completed in the priority areas identified[1]. Indeed, areas that are difficult to access have not yet been decontaminated, such as the municipalities located in the immediate vicinity of the nuclear power plant. Olivier Evrard, a researcher at the Laboratory of Climate and Environmental Sciences and coordinator of the study (CEA/CNRS/UVSQ), in collaboration with Patrick Laceby of Alberta Environment and Parks (Canada) and Atsushi Nakao of Kyoto Prefecture University (Japan), compiled the results of approximately sixty scientific studies published on the topic.

This synthesis focuses mainly on the fate of radioactive cesium in the environment because this radioisotope was emitted in large quantities during the accident, contaminating an area of more than 9,000 km2. In addition, since one of the cesium isotopes (137Cs) has a half-life of 30 years, it constitutes the highest risk to the local population in the medium and long term, as it can be estimated that in the absence of decontamination it will remain in the environment for around three centuries. “The feedback on decontamination processes following the Fukushima nuclear accident is unprecedented,” according to Olivier Evrard, “because it is the first time that such a major clean-up effort has been made following a nuclear accident. The Fukushima accident gives us valuable insights into the effectiveness of decontamination techniques, particularly for removing cesium from the environment.” This analysis provides new scientific lessons on decontamination strategies and techniques implemented in the municipalities affected by the radioactive fallout from the Fukushima accident. This synthesis indicates that removing the surface layer of the soil to a thickness of 5 cm, the main method used by the Japanese authorities to clean up cultivated land, has reduced cesium concentrations by about 80% in treated areas. Nevertheless, the removal of the uppermost part of the topsoil, which has proved effective in treating cultivated land, has cost the Japanese state about €24 billion. This technique generates a significant amount of waste, which is difficult to treat, to transport and to store for several decades in the vicinity of the power plant, a step that is necessary before it is shipped to final disposal sites located outside Fukushima prefecture by 2050. By early 2019, Fukushima’s decontamination efforts had generated about 20 million cubic meters of waste.

Decontamination activities have mainly targeted agricultural landscapes and residential areas. The review points out that the forests have not been cleaned up – because of the difficulty and very high costs that these operations[2] would represent – as they cover 75% of the surface area located within the radioactive fallout zone. These forests constitute a potential long-term reservoir of radiocesium, which can be redistributed across landscapes as a result of soil erosion, landslides, and floods, particularly during typhoons that can affect the region between July and October. Atsushi Nakao, co-author of the publication, stresses the importance of continuing to monitor the transfer of radioactive contamination at the scale of coastal watersheds that drain the most contaminated part of the radioactive fallout zone. This monitoring will help scientists understand the fate of residual radiocesium in the environment in order to detect possible recontamination of the remediated areas due to flooding or intense erosion events in the forests.

The analysis recommends further research on: This research will be the subject of a Franco-Japanese and multidisciplinary international research project, MITATE (Irradiation Measurement Human Tolerance viA Environmental Tolerance), led by the CNRS in collaboration with various French (including the CEA) and Japanese organizations, which will start on January 1, 2020, for an initial period of 5 years.

Complementary approaches
This research is complementary to the project to develop bio- and eco-technological methods for the rational remediation of effluents and soils, in support of a post-accident agricultural rehabilitation strategy (DEMETERRES), led by the CEA, and conducted in partnership with INRA and CIRAD Montpellier.

1 In Fukushima prefecture and the surrounding prefectures, the decision to decontaminate the landscapes affected by the radioactive fallout was made in November 2011 for 11 districts that were evacuated after the accident (special decontamination zone – SDZ – 1,117 km2) and for 40 districts affected by lower, but still significant levels of radioactivity and that had not been evacuated in 2011 (areas of intensive monitoring of the contamination – ICA, 7836 km2).
2 128 billion euros according to one of the studies appearing in the review to be published on December 12, 2019, in SOIL.
3 Relating to soil fertility and the transfer of radiocesium from the soil to plants, for example.

This research is presented in the paper “Effectiveness of landscape decontamination following the Fukushima nuclear accident: a review” published in the EGU open access journal SOIL on December 12, 2019.