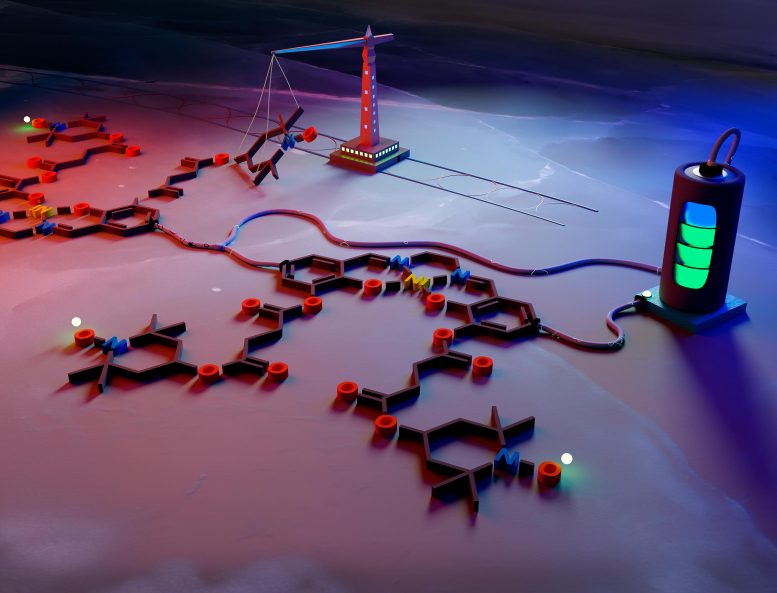 Symbolic representation of the chemical formula of the new polymer. Credit: Anatoliy A. Vereshchagin

Moreover, it is safer in terms of potential fire hazards and has a lower environmental impact.

It is difficult to imagine our daily life without lithium-ion batteries. They dominate the small format battery market for portable electronic devices, and are also commonly used in electric vehicles. At the same time, lithium-ion batteries have a number of serious issues, including: a potential fire hazard and performance loss at cold temperatures; as well as a considerable environmental impact of spent battery disposal.

According to the leader of the team of researchers, Professor in the Department of Electrochemistry at St Petersburg University Oleg Levin, the chemists have been exploring redox-active nitroxyl-containing polymers as materials for electrochemical energy storage. These polymers are characterized by a high energy density and fast charging and discharging speed due to fast redox kinetics. One challenge towards the implementation of such a technology is the insufficient electrical conductivity. This impedes the charge collection even with highly conductive additives, such as carbon.

Looking for solutions to overcome this problem, the researchers from St Petersburg University synthesized a polymer-based on the nickel-salen complex (NiSalen). The molecules of this metallopolymer act as a molecular wire to which energy-intensive nitroxyl pendants are attached. The molecular architecture of the material enables high capacitance performance to be achieved over a wide temperature range. ‘We came up with the concept of this material in 2016. At that time, we began to develop a fundamental project “Electrode materials for lithium-ion batteries based on organometallic polymers”. It was supported by a grant from the Russian Science Foundation. When studying the charge transport mechanism in this class of compounds, we discovered that there are two keys directions of development. Firstly, these compounds can be used as a protective layer to cover the main conductor cable of the battery, which would be otherwise made of traditional lithium-ion battery materials. And secondly, they can be used as an active component of electrochemical energy storage materials,’ explains Oleg Levin.

The polymer took over three years to develop. In the first year, the scientists tested the concept of the new material: they combined individual components to simulate the electrically conducting backbone and redox-active nitroxyl-containing pendants. It was essential to make certain that all parts of the structure worked in conjunction and reinforced each other. The next stage was the chemical synthesis of the compound. It was the most challenging part of the project. This is because some of the components are extremely sensitive and even the slightest error of a scientist may cause degradation of the samples.

Of the several polymer specimens obtained, only one was found to be sufficiently stable and efficient. The main chain of the new compound is formed by complexes of nickel with salen ligands. A stable free radical, capable of rapid oxidation and reduction (charge and discharge), has been linked to the main chain via covalent bonds.

‘A battery manufactured using our polymer will charge in seconds – about ten times faster than a traditional lithium-ion battery. This has already been demonstrated through a series of experiments. However, at this stage, it is still lagging behind in terms of capacity – 30 to 40% lower than in lithium-ion batteries. We are currently working to improve this indicator while maintaining the charge-discharge rate,’ says Oleg Levin.

The cathode for the new battery has been fabricated – a positive electrode for use in chemical current sources. Now we need the negative electrode – the anode. In fact, it does not have to be created from scratch – it can be selected from the existing ones. Paired together they will form a system that, in some areas, may soon supersede lithium-ion batteries.

‘The new battery is capable of operating at low temperatures and will be an excellent option where fast charging is crucial. It is safe to use – there is nothing that may pose a combustion hazard, unlike the cobalt-based batteries that are widespread today. It also contains significantly less metals that can cause environmental harm. Nickel is present in our polymer in a small amount, but there is much less of it than in lithium-ion batteries,’ says Oleg Levin.