By Baylor College of Medicine February 9, 2021 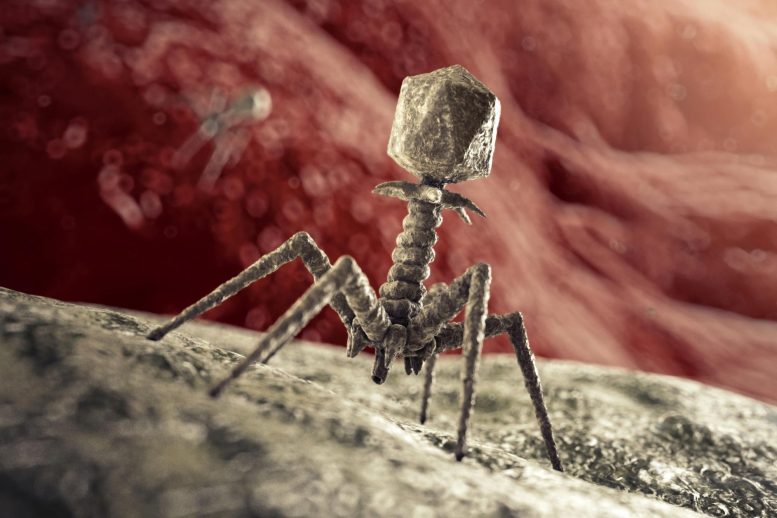 Researchers at Baylor College of Medicine and other institutions have identified a novel strategy that can eliminate bacteria in a specific location before they cause an infection. The strategy uses a phage, a virus that infects and destroys bacteria, that can specifically locate in the same place the bacteria live in the gastrointestinal tract. The proximity between phage and bacteria facilitates the phage’s attack and subsequent elimination of the bacteria.

This strategy has the potential of becoming a game changer in the fight against antibiotic-resistant bacteria that live in hard-to-reach places, such as the mucus layer of the gut. The study appears in the journal mBio.

“Phages are very specific in their ability to infect and destroy certain species or strains of bacteria and not others, such as good bacteria. In the U.S., phage therapy is increasingly becoming an available option to treat antibiotic-resistant bacterial infections, a serious health concern,” said first author Dr. Sabrina Green, director of research and development for TAILΦR labs at Baylor.

Antibiotic-resistant bacteria, such as ExPEC ST131, can colonize the human intestine without causing disease, but they also can exit the gut and infect other organs. For instance, these bacteria have been associated with infections of the urinary tract, brain, peritoneum, peripheral organs, blood and in-dwelling devices, such as urinary catheters, vascular devices, feeding tubes and wound drains, resulting in 9 million infections per year.

The team showed in previous work that phages can effectively treat an infection caused by ExPEC ST131 bacteria. In this study, they wanted to see if they could use phages to remove these bacteria to prevent an infection.

Many phages have a hard time fighting bacteria in the gut. The team discovered that there is a factor present in mammalian intestines that prevents phages from destroying bacteria. They identified the factor as mucin, sticky proteins that form a layer between intestinal epithelial cells and the layer of microorganisms.

The researchers reasoned that although mucins prevent many phages from infecting bacteria, there may be some that have evolved a way to counter the effect of mucins and, as a result, are able to target bacteria in high-mucin environments.

“We screened human sewage and animal feces for phages with unique properties that facilitate their ability to destroy bacteria in the presence of mucins,” said corresponding author Dr. Anthony Maresso, associate professor of molecular virology and microbiology at Baylor. “We discovered a novel phage called ES17 that binds to mucins, and this property seemed to enhance its ability to infect bacteria in mucin-rich environments, such as the gut.”

Further studies looked closer at this novel phage-mucin interaction. Green, Maresso and their colleagues discovered that phage ES17 binds to particular molecules called heparan sulfate which can be found not only in mucins, but also on the surface of various cells types, including epithelial cells. This prompted the researchers to investigate whether binding to heparan sulfate on epithelial cells, which the researchers had also discovered is the same binding site used by ES17’s host bacteria ExPEC, would contribute to ES17’s ability to target and destroy the bacteria in the gut environment.

“We tested the effect of phage ES17 on its bacterial host ExPEC in a murine intestine, comparing it with phages known to be unable to infect their bacterial host in complex environments,” Green said. “We found that only ES17 had the unique ability to target and eliminate ExPEC bacteria in animal models.”

Taken altogether, the findings suggest that the ability of phage ES17 to bind to heparan sulfate on mucin-rich surfaces and directly on mammalian epithelial cells mediates its localization in areas deep in the gut where reservoirs of bacteria may be present. The researchers propose that being close to ExPEC bacteria facilitates phage invasion and bacterial elimination before they have the opportunity to exit the gut and infect other organs.

“Phages are viruses that specialize in invading and eliminating specific bacteria. Here we have shown the first phage that also binds to epithelial human cells and that this property mediates a novel mechanism for fighting bacterial infections we call positional targeting, as it enables the phage to anticipate where the bacteria it targets will be located,” Maresso said. “We foresee the possibility that positional targeting will be the way smart drugs work in the future. Drugs won’t be just distributed all through the body in the hopes that some of it will end in the right spot. The drugs of the future will go only precisely where they are supposed to work. Our work with phages is the first case in which this has been achieved.”

Be the first to comment on "Antibiotic Game-Changer: Phages Can Anticipate Bacteria’s Location and Destroy Them Before They Cause an Infection"