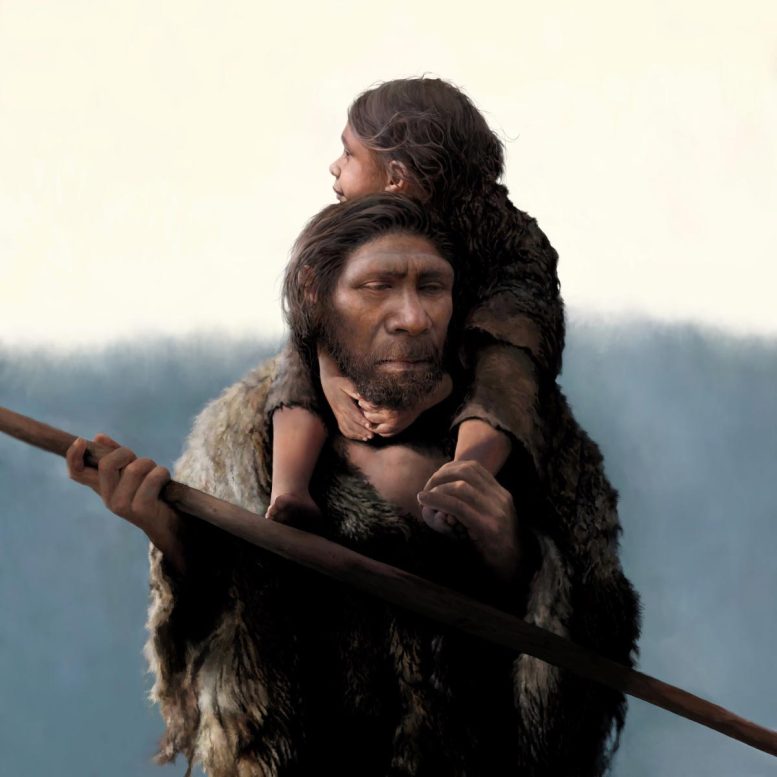 An artist’s illustration of a Neanderthal father and his daughter. Credit: Tom Bjorklund

Ancient genomes of thirteen Neanderthals provide an unprecedented snapshot of their community and social organization.

For the first time, scientists have managed to sequence multiple individuals from a remote Neanderthal community in Siberia. Among these thirteen individuals, the investigators identified multiple related individuals, including a father and his teenage daughter. The thirteen genomes also allowed the researchers to provide a glimpse into the social organization of a Neanderthal community. They appear to have been a small group of close relatives, consisting of ten to twenty members, and communities were primarily connected through female migration.

In 2010, the first Neanderthal draft genome was published. Since then, researchers from the Max Planck Institute for Evolutionary Anthropology have sequenced an additional 18 genomes from 14 different archaeological sites throughout Eurasia. Although these genomes have provided insights into the general outline of Neanderthal history, we still know very little of individual Neanderthal communities.

Neanderthals (also known as Neandertals or Homo neanderthalensis) are an extinct species or subspecies of archaic humans who lived in Eurasia until about 40,000 years ago. It is unclear when the line of Neanderthals split from that of modern humans and why they disappeared.

To explore the social structure of Neanderthals, the scientists turned their attention to southern Siberia. This is a region that has previously been very valuable for ancient DNA research – including the discovery of Denisovan hominin remains at the famous Denisova Cave. From work done at that site, we know that Neanderthals and Denisovans were present in this region over hundreds of thousands of years. We also know that Neanderthals and Denisovans have interacted with each other – as the finding of a child with a Denisovan father and a Neanderthal mother has shown.

In their new study, the international team led by researchers from the Max Planck Institute for Evolutionary Anthropology focused on the Neanderthal remains in Chagyrskaya and Okladnikov Caves, which are within 100 kilometers (60 miles) of Denisova Cave. Neanderthals briefly occupied these sites around 54,000 years ago, and multiple potentially contemporaneous Neanderthal remains had been recovered from their deposits. The scientists successfully retrieved DNA from 17 Neanderthal remains – the largest number of Neanderthal remains ever sequenced in a single study.

Chagyrskaya Cave has been excavated over the last 14 years by researchers from the Institute of Archaeology and Ethnography, Russian Academy of Sciences. Besides several hundred thousand stone tools and animal bones, they also recovered more than 80 bone and tooth fragments of Neanderthals, one of the largest assemblages of these fossil humans not only in the region but also in the world. The Neanderthals at Chagyrskaya and Okladnikov hunted ibex, horses, bison, and other animals that migrated through the river valleys that the caves overlook. They collected raw materials for their stone tools dozens of kilometers away, and the occurrence of the same raw material at both Chagyrskaya and Okladnikov Caves also supports the genetic data that the groups inhabiting these localities were closely linked.

Previous studies of a fossil toe from Denisova cave showed that Neanderthals inhabited the Altai mountains considerably earlier as well, around 120,000 years ago. Genetic data shows though, that the Neanderthals from Chagyrskaya and Okladnikov Caves are not descendants of these earlier groups, but are more closely related to European Neanderthals. This is also supported by the archaeological material: the stone tools from Chagyrskaya Cave are most similar to the so-called Micoquian culture known from Germany and Eastern Europe.

The 17 remains came from 13 Neanderthal individuals – 7 men and 6 women, of which 8 were adults and 5 were children and young adolescents. In their mitochondrial DNA, the researchers found several so-called heteroplasmies that were shared between individuals. Heteroplasmies are a special kind of genetic variant that only persists for a small number of generations.

Among these remains were those of a Neanderthal father and his teenage daughter. The researchers also found a pair of second-degree relatives: a young boy and an adult female, perhaps a cousin, aunt or grandmother. The combination of heteroplasmies and related individuals strongly suggests that the Neanderthals in Chagyrskaya Cave must have lived – and died – at around the same time. “The fact that they were living at the same time is very exciting. This means that they likely came from the same social community. So, for the first time, we can use genetics to study the social organization of a Neanderthal community,” says Laurits Skov, who is first author on this study.

Another striking finding is the extremely low genetic diversity within this Neanderthal community, consistent with a group size of 10 to 20 individuals. This is much lower than those recorded for any ancient or present-day human community, and is more similar to the group sizes of endangered species at the verge of extinction.

However, Neanderthals didn’t live in completely isolated communities. By comparing the genetic diversity on the Y-chromosome, which is inherited father-to-son, with the mitochondrial DNA diversity, which is inherited from mothers, the researchers could answer the question: Was it the men or the women who moved between communities? They found that the mitochondrial genetic diversity was much higher than the Y chromosome diversity, which suggests that these Neanderthal communities were primarily linked by female migration. Despite the proximity to Denisova Cave, these migrations do not appear to have involved Denisovans – the researchers found no evidence of Denisovan gene flow in the Chagyrskaya Neanderthals in the last 20,000 years before these individuals lived.

“Our study provides a concrete picture of what a Neanderthal community may have looked like,” says Benjamin Peter, the last author of the study. “It makes Neanderthals seem much more human to me.”