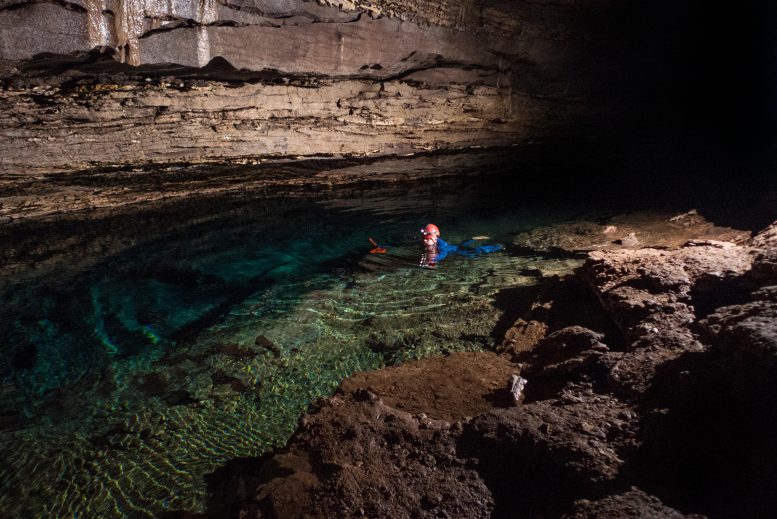 A species of crayfish thought to be extinct was found in Shelta Cave, where Dr. Matthew L. Niemiller is snorkeling (shown above). Credit: Amata Hinkle

A cave inside Huntsville’s city was discovered to contain a small, rare crayfish that was previously believed to be extinct.

A team led by an assistant professor at The University of Alabama in Huntsville (UAH) has uncovered a small, rare crayfish that was believed to have been extinct for 30 years in a cave in the City of Huntsville in northern Alabama. Crayfish are a type of freshwater crustaceans that look similar to small lobsters.

The Shelta Cave Crayfish, scientifically known as Orconectes sheltae, was discovered by Dr. Matthew L. Niemiller’s team during 2019 and 2020 trips into Shelta Cave, its sole habitat.

A 2,500-foot cave system that is owned and maintained by the National Speleological Society (NSS) is the crayfish’s home. It is discretely tucked under the NSS’s national headquarters in northwest Huntsville, and it is surrounded by busy roads. 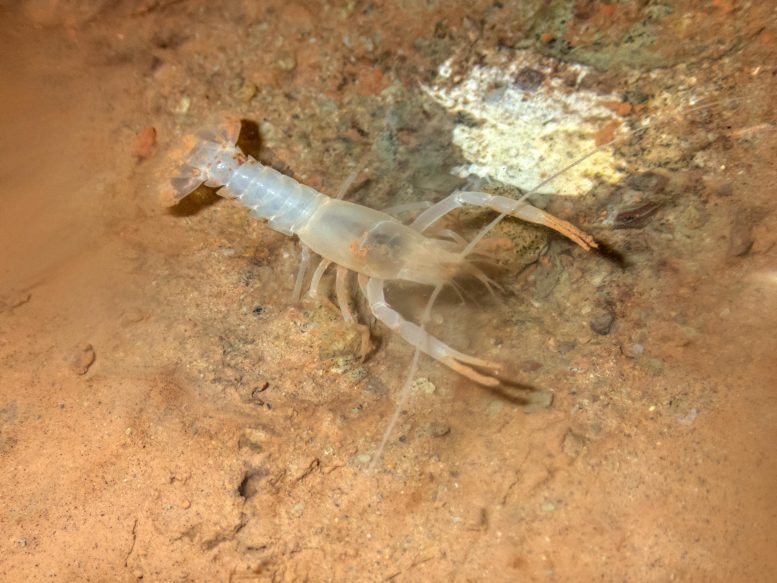 “The crayfish is only a couple of inches long with diminutive pincers that are called chelae,” Dr. Niemiller says. “Interestingly, the crayfish has been known to cave biologists since the early 1960s but was not formally described until 1997 by the late Dr. John Cooper and his wife Martha.”

Dr. Cooper, a biologist and speleologist who was a member of the NSS, studied the aquatic life in Shelta Cave with a particular focus on crayfish for his dissertation work in the late 1960s and early 1970s. Shelta Cave’s aquatic ecosystem was particularly diverse then, with at least 12 cave-dependent species documented, including three species of cave crayfishes.

“No other cave system to date in the U.S. has more documented cave crayfishes co-occurring with each other,” Dr. Niemiller says.

But the aquatic ecosystem, including the Shelta Cave Crayfish, crashed sometime in the early 1970s. The crash may be related to a gate that was built to keep people out of the cave and yet still allows a grey bat maternity population to move freely in and out.

“The initial design of the gate was not bat-friendly, and the bats ultimately vacated the cave system,” Dr. Niemiller says. “Coupled with groundwater pollution and perhaps other stressors, that all may have led to a perfect storm resulting in the collapse of the aquatic cave ecosystem.”

“After a couple of decades of no confirmed sightings and the documented dramatic decline of other aquatic cave life at Shelta Cave, it was feared by some, including myself, that the crayfish might now be extinct.”

While it’s encouraging that the Shelta Cave Crayfish still persists, he says scientists still haven’t rediscovered other aquatic species that once lived in the cave system, such as the Alabama Cave Shrimp and Tennessee Cave Salamander.

“The groundwater level in Shelta Cave is the result of water that works its way naturally through the rock layers above the cave – called epikarst – from the surface,” says Dr. Niemiller. “However, urbanization in the area above the cave system may have altered rates at which water infiltrates into the cave and also increased rates of pollutants, such as pesticides and heavy metals entering the cave system.”

The crayfish was rediscovered during an aquatic survey aimed at documenting all life that was encountered in the cave system.

“I really wasn’t expecting to find the Shelta Cave Crayfish. My students, colleagues, and I had visited the cave on several occasions already leading up to the May 2019 trip,” Dr. Niemiller says. “We would be fortunate to see just a couple of Southern Cavefish and Southern Cave Crayfish during a survey.”

While snorkeling in about 15 feet of water in North Lake located in the Jones Hall section of the cave, Dr. Niemiller spotted a smaller-sized cave crayfish below him.

“As I dove and got closer, I noticed that the chelae, or pincers, were quite thin and elongated compared to other crayfish we had seen in the cave,” he says. “I was fortunate to swoop up the crayfish with my net and returned to the bank.”

It was a female, measuring under an inch in carapace length, and had developing ova internally, so it was a mature adult.

“We noted some other morphological characters, took photographs, acquired a tissue sample, and released the crayfish,” Dr. Niemiller says.

“The second Shelta Cave Crayfish that we encountered was in August 2020 in the West Lake area,” he says.

The team had searched much of the area and didn’t see much aquatic life. As they started to make their way out the lake passage to return to the surface, Nate Sturm, a master’s student in biology at the University of Alabama who had accompanied the lab for the trip, noticed a small white crayfish in an area that the team had previously walked through.

“It was a male with thin and elongated chelae,” Dr. Niemiller says. “I had already walked ahead of the area and did not see the crayfish. Thank goodness for young eyes!”

To aid identification, the team analyzed short fragments of mitochondrial DNA in the tissue samples collected.

“We compared the newly generated DNA sequences with sequences already available for other crayfish species in the region,” Dr. Niemiller says. “A challenge we faced was that no DNA sequences existed prior to our study for the Shelta Cave Crayfish, so it was a bit of a process of elimination, so to speak.”

While few crayfish are considered single-site endemics, in other words, known to exist in just one location, that’s somewhat more common in cave-dwelling species like the Shelta Cave Crayfish, he says.

Outside of the dissertation work done by Dr. Cooper, little about the life history and ecology of the species is known.

“We know nothing of the diet of the species, but it likely is an omnivore feeding on organic matter washed or brought into the cave, as well as small invertebrates such as copepods and amphipods.”

Although this research occurred prior to the grant, Dr. Niemiller is currently conducting the first-ever comprehensive assessment of groundwater biodiversity in the central and eastern United States, a pioneering search for new species and a new understanding of the complex web of life that exists right under our feet. The research is funded by a five-year, $1.029 million National Science Foundation (NSF) CAREER award.

He says knowing the health of populations of the tiny creatures that are dependent on groundwater is important.

“Groundwater is critically important not just for the organisms that live in groundwater ecosystems, but for human society for drinking water, agriculture, etc.,” Dr. Niemiller says.

“The organisms that live in groundwater provide important benefits, such as water purification and biodegradation,” he says. “They also can act like ‘canaries in the coal mine,’ indicators of overall groundwater and ecosystem health.”

Be the first to comment on "Rare Crustacean, Thought To Be Extinct, Found in a 2500-Foot-Long Cave"