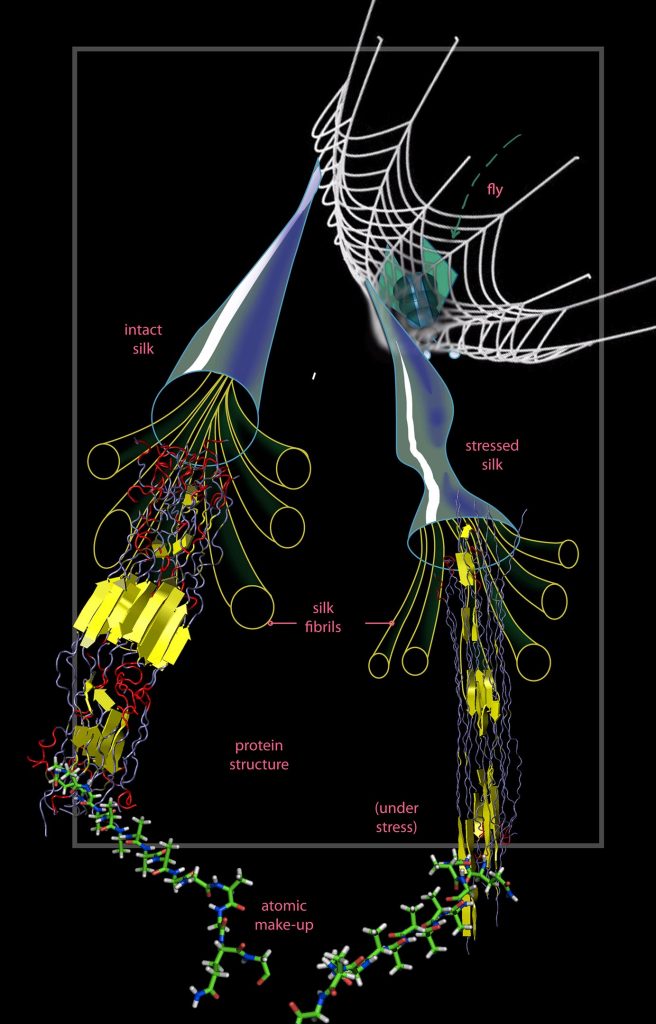 This hierarchical depiction shows how a spider web responds to stress, spanning from the web scale to the scale of protein molecules only nanometers, or billionths of a meter, across. When a force strikes the web, such as that from a trapped fly, the web deforms in distinct ways at multiple scales yet fails only where silk threads are under the most stress. The web manages that feat because of slipping that takes place within the spider-silk protein molecules. The result is compensation for some stress, yet sacrificial failure when stress becomes extreme, preserving the web as a whole. Credit: Zina Deretsky, National Science Foundation, in collaboration with S. Cranford, G. Bratzel and M.J. Buehler (all three from Massachusetts Institute of Technology, and Rihcard C. Yu and Andaluz Yu of Green Pacific Biologicals

Researchers from the Massachusetts Institute of Technology (MIT) and the Politecnico di Torino in Italy have published a new study examining how spider webs respond to stress. The research combines complex computer simulations with experimental observations of spider webs to show that web durability depends on silk strength and the overall web design to compensate for damage and varying stresses.

While researchers have long known of the incredible strength of spider silk, the robust nature of the tiny filaments cannot alone explain how webs survive multiple tears and winds that exceed hurricane strength.

Now, a study that combines experimental observations of spider webs with complex computer simulations shows that web durability depends not only on silk strength, but on how the overall web design compensates for damage and the response of individual strands to continuously varying stresses.

Find the video here.
Markus Buehler of MIT explains how spider webs survive frequent assaults without failing–and how the silk is only part of the answer.

Reporting in the cover story of the February 2, 2012, issue of Nature, researchers from the Massachusetts Institute of Technology (MIT) and the Politecnico di Torino in Italy show how spider web-design localizes strain and damage, preserving the web as a whole.

“Multiple research groups have investigated the complex, hierarchical structure of spider silk and its amazing strength, extensibility and toughness,” says Markus Buehler, associate professor of civil and environmental engineering at MIT. “But, while we understand the peculiar behavior of dragline silk from the ‘nanoscale up’–initially stiff, then softening, then stiffening again–we have little insight into how the molecular structure of silk uniquely improves the performance of a web.”

The spider webs found in gardens and garages are made from multiple silk types, but viscid silk and dragline silk are most critical to the integrity of the web. Viscid silk is stretchy, wet and sticky, and it is the silk that winds out in increasing spirals from the web center. Its primary function is to capture prey. Dragline silk is stiff and dry, and it serves as the threads that radiate out from a web’s center, providing structural support. Dragline silk is crucial to the mechanical behavior of the web.

Some of Buehler’s earlier work showed that dragline silk is composed of a suite of proteins with a unique molecular structure that lends both strength and flexibility. “While the strength and toughness of silk has been touted before–it is stronger than steel and tougher than Kevlar by weight–the advantages of silk within a web, beyond such measures, has been unknown,” Buehler adds.

Find the video here.
Animated model of deformation and breaking of a spider web under extreme stresses. The model is based on web-silk behaviors at a scale down to the molecular level.

The common spiders represented in the recent study, including orb weavers (Nephila clavipes), garden spiders (Araneus diadematus) and others, craft familiar, spiraling web patterns atop a scaffolding of radiating filaments. Building each web takes energy the spider cannot afford to expend often, so durability is key to the arachnid’s survival.

Through a series of computer models matched to laboratory experiments with spider webs, the researchers were able to tease apart what factors play what role in helping a web endure natural threats that are either localized, such as a twig falling on a filament, or distributed, such as high winds.

“For our models, we used a molecular dynamics framework in which we scaled up the molecular behavior of silk threads to the macroscopic world. This allowed us to investigate different load cases on the web, but more importantly, it also allowed us to trace and visualize how the web fractured under extreme loading conditions,” says Anna Tarakanova, who developed the computer models along with Steven Cranford, both graduate students in Buehler’s laboratory.

Find the video here.
Animation of vibrations and deformation of a spider web subjected to mechanical forces. The model is based on web-silk behaviors at a scale down to the molecular level.

“Through computer modeling of the web,” Cranford adds, “we were able to efficiently create ‘synthetic’ webs, constructed out of virtual silks that resembled more typical engineering materials such as those that are linear elastic, like many ceramics, and elastic-plastic materials, which behave like many metals. With the models, we could make comparisons between the modeled web’s performance and the performance seen in the webs made from natural silk. In addition, we could analyze the web in terms of energy, and details of the local stress and strain,” which are traits experiments were able to reveal.

The study showed that, as one might expect, when any part of a web is perturbed, the whole web reacts. Such sensitivity is what alerts a spider to the struggling of a trapped insect. However, the radial and spiral filaments each play different roles in attenuating motion, and when stresses are particularly harsh, they are sacrificed so that the entire web may survive.

“The concept of selective, localized failure for spider webs is interesting since it is a distinct departure from the structural principles that seem to be in play for many biological materials and components,” adds Dennis Carter, the NSF program director for biomechanics and mechanobiology who helped support the study.

“For example, the distributed material components in bone spread stress broadly, adding strength. There is no ‘wasted’ material, minimizing the weight of the structure. While all of the bone is being used to resist force, bone everywhere along the structure tends to be damaged prior to failure.” In contrast, a spider’s web is organized to sacrifice local areas so that failure will not prevent the remaining web from functioning, even if in a diminished capacity, says Carter. “This is a clever strategy when the alternative is having to make an entire, new web,” he adds. “As Buehler suggests, engineers can learn from nature and adapt the design strategies that are most appropriate for specific applications.”

Specifically, when a radial filament in a web is snagged, the web deforms more than when a relatively compliant spiral filament is caught. However, when either type fails–under great stress–it is the only filament to fail.

The unique nature of the spider-silk proteins enhances that effect. When a filament is pulled, the silk’s unique molecular structure–a combination of amorphous proteins and ordered, nanoscale crystals–unfurls as stress increases, leading to a stretching effect that has four distinct phases: an initial, linear tugging; a drawn out stretching as the proteins unfold; a stiffening phase that absorbs the greatest amount of force; and then a final, stick-slip phase before the silk breaks. Blueprints of the multi-scale material structure of spider silk, from the molecular to the macroscopic scale. Credit: S. Cranford and M.J. Buehler/MIT

According to the researchers’ findings, the failure of silk threads occurs at points where the filament is disturbed by that external force, but after failure, the web returns to stability–even in simulations using broad forces, like hurricane-force winds.

“Engineered structures are typically designed to withstand large loads with limited damage, but extreme loads are more difficult to account for,” says Cranford. “The spider has uniquely solved this problem by allowing a sacrificial member to fail under high load. One of the first questions a structural engineer must ask is ‘What is the design load?’ For a spider web, however, it doesn’t matter if the load is just strong enough to cause failure, or one hundred times higher–the net effect is the same. Allowing a sacrificial member to fail removes the unpredictability of ‘extreme’ loads from the design equation.”