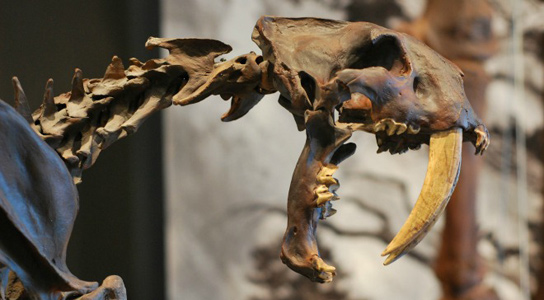 A cast of Smilodon at the Natural History Museum of Utah. Credit: Brian Switek/Wired

The extinct genus Smilodon encompasses three species, and they are part of North American’s vanished megafauna. While the carnivore broadly resembles other Felidae, its fangs have been somewhat of a mystery for paleontologists, especially in the family’s largest species, Smilodon populator, which had 12-inch canines.

Smilodon lived in North and South America during the Early to Late Pleistocene, 2.5 million to 10,000 years ago. Despite being referred colloquially as saber-tooth tigers, Smilidon is not closely related to tigers or any living felids. The canines have been envisioned as slicing and stabbing weapons, but no clear evidence of this has been uncovered. Initially, it was thought that the canines of Smilodon were used like serrated knives, functioning as stabbing weapons in an attack.

Scientists John Merriam and Chester Stock stated in their 1932 monograph The Felidae of Rancho La Brea that Smilodon had a “heavily corrugated gum which presumably covered the hard palate” and that this feature could have proven “advantageous in blood sucking.”

There’s no evidence that animals from the Smilodon genus were specialized blood drinkers. This was simply a throw-away comment in a brief and speculative account on how the animal could have fed.

Many analyses reject the ideas about the stabbing scenario and affirm that Smilodon probably killed horses, camels, bison, mammoths, and other mid-sized herbivores by biting them in the neck or belly. Its canines were fragile, and wouldn’t have been able to penetrate bone, so they would have been used only after a prey was killed.