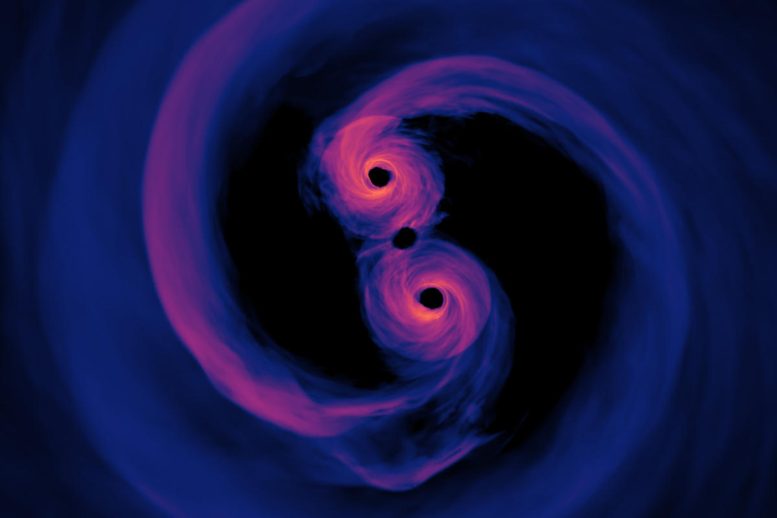 Caption: An MIT study finds that, for now, the catalog of known black hole binaries does not reveal anything fundamental about how black holes form. Pictured is a simulation of the light emitted by a supermassive black hole binary system where the surrounding gas is optically thin (transparent). Credit: NASA’s Goddard Space Flight Center

Researchers say that current measurements of black holes are insufficient to determine the formation process of these invisible giants in the universe.

The way a black hole spins can provide insight into its origins, particularly for binary black holes, which are two black holes that orbit each other closely before merging. The spin and tilt of each black hole just before they merge can indicate whether the black holes formed from a quiet galactic disk or a more active cluster of stars.

Astronomers are hoping to tease out which of these origin stories is more likely by analyzing the 69 confirmed binaries detected to date. But a new study finds that for now, the current catalog of binaries is not enough to reveal anything fundamental about how black holes form.

In a study appearing in the journal Astronomy and Astrophysics Letters, MIT physicists show that when all the known binaries and their spins are worked into models of black hole formation, the conclusions can look very different, depending on the particular model used to interpret the data.

A black hole’s origins can therefore be “spun” in different ways, depending on a model’s assumptions of how the universe works.

“When you change the model and make it more flexible or make different assumptions, you get a different answer about how black holes formed in the universe,” says study co-author Sylvia Biscoveanu, an MIT graduate student working in the LIGO Laboratory. “We show that people need to be careful because we are not yet at the stage with our data where we can believe what the model tells us.”

The study’s co-authors include Colm Talbot, an MIT postdoc; and Salvatore Vitale, an associate professor of physics and a member of the Kavli Institute of Astrophysics and Space Research at MIT.

A tale of two origins

Black holes in binary systems are thought to arise via one of two paths. The first is through “field binary evolution,” in which two stars evolve together and eventually explode in supernovae, leaving behind two black holes that continue circling in a binary system. In this scenario, the black holes should have relatively aligned spins, as they would have had time — first as stars, then black holes — to pull and tug each other into similar orientations. If a binary’s black holes have roughly the same spin, scientists believe they must have evolved in a relatively quiet environment, such as a galactic disk.

Black hole binaries can also form through “dynamical assembly,” where two black holes evolve separately, each with its own distinct tilt and spin. By some extreme astrophysical processes, the black holes are eventually brought together, close enough to form a binary system. Such a dynamical pairing would likely occur not in a quiet galactic disk, but in a more dense environment, such as a globular cluster, where the interaction of thousands of stars can knock two black holes together. If a binary’s black holes have randomly oriented spins, they likely formed in a globular cluster.

But what fraction of binaries form through one channel versus the other? The answer, astronomers believe, should lie in data, and particularly, measurements of black hole spins.

To date, astronomers have derived the spins of black holes in 69 binaries, which have been discovered by a network of gravitational-wave detectors including LIGO in the U.S., and its Italian counterpart Virgo. Each detector listens for signs of gravitational waves — very subtle reverberations through space-time that are left over from extreme, astrophysical events such as the merging of massive black holes.

With each binary detection, astronomers have estimated the respective black hole’s properties, including their mass and spin. They have worked the spin measurements into a generally accepted model of black hole formation and found signs that binaries could have both a preferred, aligned spin, as well as random spins. That is, the universe could produce binaries in both galactic disks and globular clusters.

“But we wanted to know, do we have enough data to make this distinction?” Biscoveanu says. “And it turns out, things are messy and uncertain, and it’s harder than it looks.”

In their new study, the MIT team tested whether the same data would yield the same conclusions when worked into slightly different theoretical models of how black holes form.

The team first reproduced LIGO’s spin measurements in a widely used model of black hole formation. This model assumes that a fraction of binaries in the universe prefer to produce black holes with aligned spins, where the rest of the binaries have random spins. They found that the data appeared to agree with this model’s assumptions and showed a peak where the model predicted there should be more black holes with similar spins.

They then tweaked the model slightly, altering its assumptions such that it predicted a slightly different orientation of preferred black hole spins. When they worked the same data into this tweaked model, they found the data shifted to line up with the new predictions. The data also made similar shifts in 10 other models, each with a different assumption of how black holes prefer to spin.

“Our paper shows that your result depends entirely on how you model your astrophysics, rather than the data itself,” Biscoveanu says.

“We need more data than we thought if we want to make a claim that is independent of the astrophysical assumptions we make,” Vitale adds.

Just how much more data will astronomers need? Vitale estimates that once the LIGO network starts back up in early 2023, the instruments will detect one new black hole binary every few days. Over the next year, that could add up to hundreds more measurements to add to the data.

“The measurements of the spins we have now are very uncertain,” Vitale says. “But as we build up a lot of them, we can gain better information. Then we can say, no matter the detail of my model, the data always tells me the same story — a story that we could then believe.”

Reference: “Spin it as you like: The (lack of a) measurement of the spin tilt distribution with LIGO-Virgo-KAGRA binary black holes” by Salvatore Vitale, Sylvia Biscoveanu and Colm Talbot, 9 December 2022, Astronomy and Astrophysics Letters.
DOI: 10.1051/0004-6361/202245084

2 Comments on "The Black Hole Puzzle: Piecing Together the Origins of Invisible Giants"