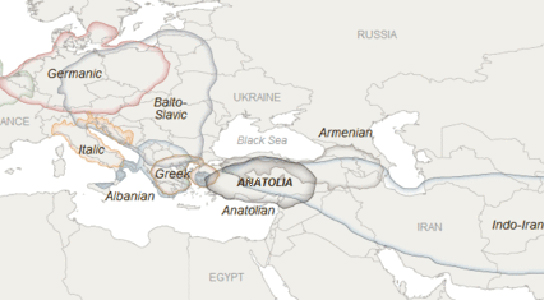 Diverse languages, from English to Hindi, can trace their roots back 8,000 years to Anatolia (Asia Minor), a region that’s centered around modern-day Turkey. The study assessed 103 ancient and contemporary languages using a technique that’s normally used to study the spread and evolution of diseases.

Languages such as English, Dutch, Spanish, Russian, Greek and Hindi might sound very different, but there are some similarities. More than a hundred languages from across Europe and the Middle East, stem from one progenitor. It has been hypothesized that Indo-European languages spread thanks to the farming techniques from Turkey to Europe and Asia, 8,000 to 9,500 years ago. Other hypotheses state that nomadic horsemen brought the roots of the language from central Asia 6,000 years ago. While there is archaeological evidence to support both of these theories, genetic studies of Indo-Europeans have remained inconclusive, leading to a debate between linguists, anthropologists and cultural historians.

Russell Gray and his then doctoral student, Quentin Atkinson, pioneered the use of disease maps to this kind of problem back in 2003. Neither of them are linguists, but the models used in evolutionary ecology could answer important questions about language prehistory. There can be similarities drawn between genes and words, and while language evolution has traditionally been mapped using a tree format, Gray and Atkinson theorized that the evolution of words was similar to the evolution of species. They published their new findings in the journal Science.

They theorized that the cognate of words could be modeled on DNA sequences and then lead to a measurement of how languages evolved. The rate that words mutated could be used to determine at what age the Indo-European languages diverged from each other.

Instead of acceptance, many linguists and archaeologists still favor the Kurgan hypothesis. There might be a bias in the underlying data that could have led to an erroneous conclusion. The  model used could also not be the right fit for the complex linguistic and archaeological evidence.