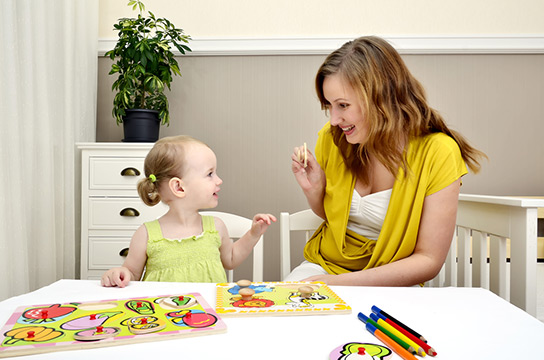 UChicago researchers have found that children who played with puzzles at a young age later perform better on tasks utilizing spatial skills.

Researchers from the University of Chicago discovered that children who play with puzzles between 26 and 46 months of age have better spatial skills when assessed at 54 months of age. The study shows that of the 53 child-parent pairs used, both boys and girls who played with puzzles had better spatial skills, but boys played with more complicated puzzles than girls and boys also performed better than girls on a mental transformation task given at 54 months of age.

Children who play with puzzles between ages 2 and 4 later develop better spatial skills, a study by University of Chicago researchers has found. Puzzle play was found to be a significant predictor of spatial skill after controlling for differences in parents’ income, education and the overall amount of parent language input.

In examining video recordings of parents interacting with children during everyday activities at home, researchers found children who play with puzzles between 26 and 46 months of age have better spatial skills when assessed at 54 months of age.

“The children who played with puzzles performed better than those who did not, on tasks that assessed their ability to rotate and translate shapes,” said psychologist Susan Levine, a leading expert on mathematics development in young children.

The ability to mentally transform shapes is an important predictor of STEM (Science, Technology, Engineering and Mathematics) course-taking, degrees and careers in older children. Activities such as early puzzle play may lay the groundwork for the development of this ability, the study found.

Levine, the Stella M. Rowley Professor in Psychology at UChicago, is lead author on a paper, “Early Puzzle Play: A Predictor of Preschoolers’ Spatial Transformation Skill,” published in the current early view issue of Developmental Science.

The study is the first to look at puzzle play in a naturalistic setting. For the research, 53 child-parent pairs from diverse socioeconomic backgrounds participated in a longitudinal study, in which researchers video-recorded parent-child interactions for 90-minute sessions that occurred every four months between 26 and 46 months of age.

The parents were asked to interact with their children as they normally would, and about half of the children in the study were observed playing with puzzles at least once. Higher-income parents tended to engage children with puzzles more frequently. Both boys and girls who played with puzzles had better spatial skills, but boys played with more complicated puzzles than girls, and the parents of boys provided more spatial language during puzzle play and were more engaged in play than the parents of girls.

Boys also performed better than girls on a mental transformation task given at 54 months of age.

“Further study is needed to determine if the puzzle play and the language children hear about spatial concepts is causally related to the development of spatial skills — and to examine why there is a sex difference in the difficulty of the puzzles played with and in the parents’ interactions with boys and girls,” Levine explained. “We are currently conducting a laboratory study in which parents are asked to play with puzzles with their preschool sons and daughters, and the same puzzles are provided to all participants.

“We want to see whether parents provide the same input to boys and girls when the puzzles are of the same difficulty,” Levine said. “In the naturalistic study, parents of boys may have used more spatial language in order to scaffold their performance.”

Alternatively, the difference in parent spatial language and engagement may be related to a societal stereotype that males have better spatial skills. “Our findings suggest that engaging both boys and girls in puzzle play can support the development of an aspect of cognition that has been implicated in success in the STEM disciplines,” Levine said.

The research on puzzle play is part of a series of studies based on observations in naturalistic settings Levine has led. In previous papers, she and colleagues have shown the importance of using words related to mathematics and spatial concepts in advancing children’s knowledge.