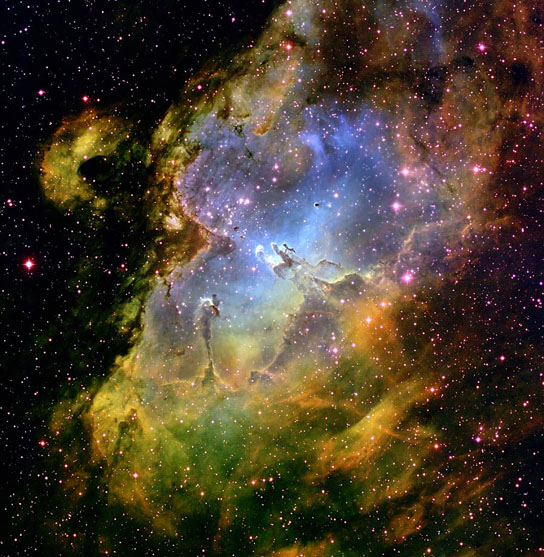 This image of the Eagle Nebula, made with data from the Kitt Peak telescope, corresponds more closely to the authors’ model than tothe traditional model. In their model planets form in a cold, three-dimensional cloud of gas and dust. Image Credit: T. A. Rector & B. A. Wolpa, NOAO, AURA

Researchers at Washington University in St. Louis have come up with a new explanation for planetary accretion. By using classical physics and the laws of thermodynamics and mechanics, the researchers present an accretion model that assumes a three-dimensional gas cloud that collapses and forms the Sun and planets instead of the prevailing model that assumes that the Solar System’s planets grew as small grains colliding chaotically.

The prevailing model for planetary accretion, also called fractal assembly, and dating back as far as the 18th century, assumes that the Solar System’s planets grew as small grains colliding chaotically, coalescing into bigger ones, colliding yet more until they formed planetesimals. The planetesimals then collided until they formed planets as varied as the Earth and Jupiter.

The model assumes that this occurred in an extremely hot (as high as 1,600 degrees Celsius) environment for the inner Solar System, fostered by a dusty, two-dimensional disk post-dating the Sun.

The basic modern model, developed by Russian astronomer Victor Safronov, and further developed by planetary scientist George Wetherill, is called the Solar Nebular Disk Model and was made available in English in the early 1970s. It has remained essentially the same over the past 40 years. 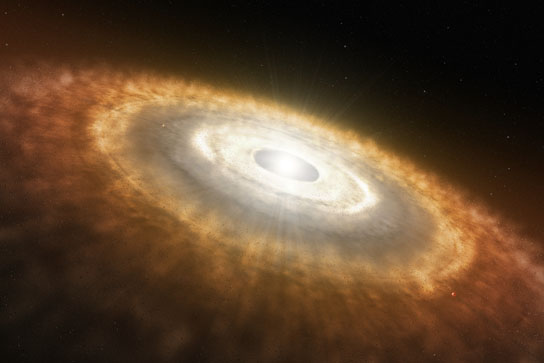 The planetary scientists say that the solar system we know today could not have formed out of a flat, hot disk that postdates the Sun, like the one shown in this artist’s impression. Image Credit: ESO/L. Calçada

But not everyone is convinced the model is correct. How could such a chaotic, haphazard process as fractal assembly lead to the regularities of the Solar System with all of the planets in a single plane, rotating in the same sense, spinning and orbiting around the Sun?

Using classical physics, the laws of thermodynamics and mechanics, Hofmeister, with assistance from Criss, presents an accretion model that assumes a three-dimensional (3-D) gas cloud. This pre-solar nebula collapses and forms the Sun and planets at essentially the same time, with the planets contracting toward the Sun.

The temperature is cold, not hot. The thermodynamic and mechanical model of 3-D accretion explains planetary orbits and spins, unlike the 2-D model, which does not.

Hofmeister and Criss explain compositional gradients across the Solar System in terms of lighter molecules diffusing faster than heavier ones. The model connects planet mass to satellite system size via gravitational competition.

“This model is radically different,” Hofmeister says. “I looked at the assumption of whether heat could be generated when the nebula contracted and found that there is too much rotational energy in the inner planets to allow energy to spill into heating the nebula.

No energy left over for heat

“In the new model, heat production is not important in planetary formation,” Hofmeister says.

Criss says the prevailing notion that gravitational collapse is a hot process is a mis-interpretation of thermodynamics. He offers an analogy of a beaker of water placed outside in the winter. It slowly starts to freeze. Freezing water actually releases a latent heat, he says, because order (ice, a crystal) is being made from disorder (liquid).

The heat released is considerable, but it cannot warm the beaker because “it’s released only as fast as the environment will take it away,” Criss says. “If the heat would warm the water above 32 degrees Fahrenheit, the ice would melt. People clinging to the old accretion models want to make the ice and heat the beaker, too.”

The authors say 2-D models don’t explain why the inner Solar System is comprised of rocky planets and the outer gas giants.

“The first thing that happens in planet accretion is forming rocky kernels,” Hofmeister says. “The nebula starts contracting, the rocky kernels form to conserve angular momentum, and that’s where the dust ends up. Once rocky kernels exist, they attract gas to them, but only if the rocky kernel is far from the Sun, can it out-compete the Sun’s gravitational pull and collect the gas, as did Jupiter and its friends.

“But if the rocky kernel is close, like the Earth’s, it can’t out-compete the Sun. We describe this process as gravitational competition. This is why we have the regularity, spacing, and graded composition of the Solar System.”

Gravitational competition also offers a new view of formation of the moon that does not require an extremely low probability giant impact.

Not limited to the Solar System

Hofmeister says there is a continuum between single stars, binary stars, multiple stars, planets and even extrasolar planets.

“In all cases, the process is gravitational accretion of these cold, 3-D clouds making things contract and spin out, and that’s where the energy comes from,” she says. “It’s all happening in very cold temperatures, in 3-D instead of 2-D.”

Criss says there is plenty of observable evidence that the 2-D model is wrong.

“It patently doesn’t make sense that a bunch of random collisions between heavy, solid objects are going to produce a Solar System with planets orbiting the Sun in a beautiful plane, with everything having upright spins,” he says. “That’s like setting off a nuclear bomb and expecting all the trees in the world to end up neatly stacked.

Moreover, the Hubble pictures show stars being born in the Eagle nebula, and they’re formed in a cold 3-D cloud.”