A time-averaged artist’s interpretation of Patagonia during the Late Cretaceous. The animals pictured include non-avian dinosaurs, birds and other vertebrates that have been discovered in the fossil record of the region. Their specific identifications are as follows: ornithurine birds (flying and walking on the ground), Stegouros (armored dinosaur), Orretherium (mammal), Yaminuechelys (turtle), a megaraptorid (large carnivore), unenlagiines (pair of carnivores), and enantiornithine birds (in foreground). Credit: Mauricio Alvarez and Gabriel Diaz

A study led by The University of Texas at Austin is providing a glimpse into dinosaur and bird diversity in Patagonia during the Late Cretaceous, just before the non-avian dinosaurs went extinct.

The fossils represent the first record of theropods — a dinosaur group that includes both modern birds and their closest non-avian dinosaur relatives — from the Chilean portion of Patagonia. The researchers’ finds include giant megaraptors with large sickle-like claws and birds from the group that also includes today’s modern species.

“The fauna of Patagonia leading up to the mass extinction was really diverse,” said lead author Sarah Davis, who completed this work as part of her doctoral studies with Professor Julia Clarke at the UT Jackson School of Geosciences Department of Geological Sciences. “You’ve got your large theropod carnivores and smaller carnivores as well as these bird groups coexisting alongside other reptiles and small mammals.”

The study was published recently in the Journal of South American Earth Sciences. 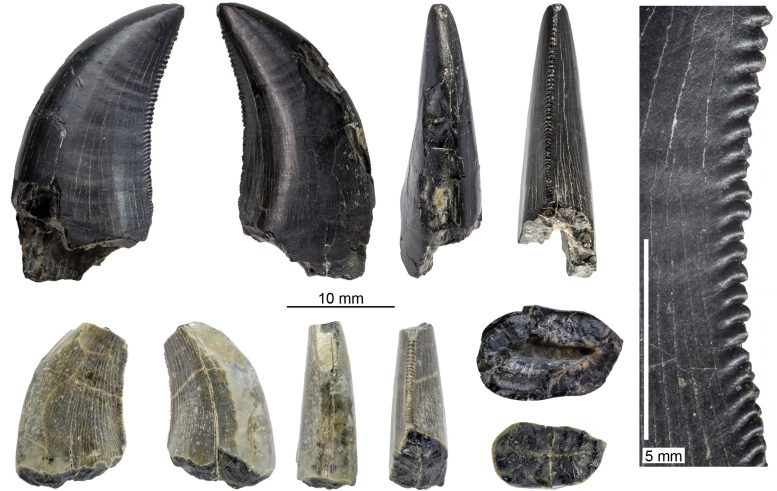 A figure from the study showing teeth from a megaraptor dinosaur from various view points. The black tooth preserves most of the tooth crow. The tan tooth is missing the crown apex and base. Credit: Davis et al.

Since 2017, members of the Clarke lab, including graduate and undergraduate students, have joined scientific collaborators from Chile in Patagonia to collect fossils and build a record of ancient life from the region. Over the years, researchers have found abundant plant and animal fossils from before the asteroid strike that killed off the dinosaurs.

The study focuses specifically on theropods, with the fossils dating from 66 to 75 million years ago.

Non-avian theropod dinosaurs were mostly carnivorous, and include the top predators in the food chain. This study shows that in prehistoric Patagonia, these predators included dinosaurs from two groups — megaraptors and unenlagiines.

Reaching over 25 feet long, megaraptors were among the larger theropod dinosaurs in South America during the Late Cretaceous. The unenlagiines — a group with members that ranged from chicken-sized to over 10 feet tall — were probably covered with feathers, just like their close relative the velociraptor. The unenlagiinae fossils described in the study are the southernmost known instance of this dinosaur group. The bird fossils were also from two groups — enantiornithines and ornithurines. Although now extinct, enantiornithines were the most diverse and abundant birds millions of years ago. These resembled sparrows — but with beaks lined with teeth. The group ornithurae includes all modern birds living today. The ones living in ancient Patagonia may have resembled a goose or duck, though the fossils are too fragmentary to tell for sure.

The researchers identified the theropods from small fossil fragments; the dinosaurs mostly from teeth and toes, the birds from small bone pieces. Davis said that the enamel glinting on the dinosaur teeth helped with spotting them among the rocky terrain.

Study co-author Marcelo Leppe, the director of the Antarctic Institute of Chile, said that these past records are key to understanding life as it exists today.

“We still need to know how life made its way in that apocalyptic scenario and gave rise to our southern environments in South America, New Zealand and Australia,” he said. “Here theropods are still present — no longer as dinosaurs as imposing as megaraptorids — but as the diverse array of birds found in the forests, swamps and marshes of Patagonia, and in Antarctica and Australia.”

The research was funded by the National Science Foundation, the National Agency for Research and Development of Chile, and the Jackson School of Geosciences.