By Harvard-Smithsonian Center for Astrophysics October 11, 2021 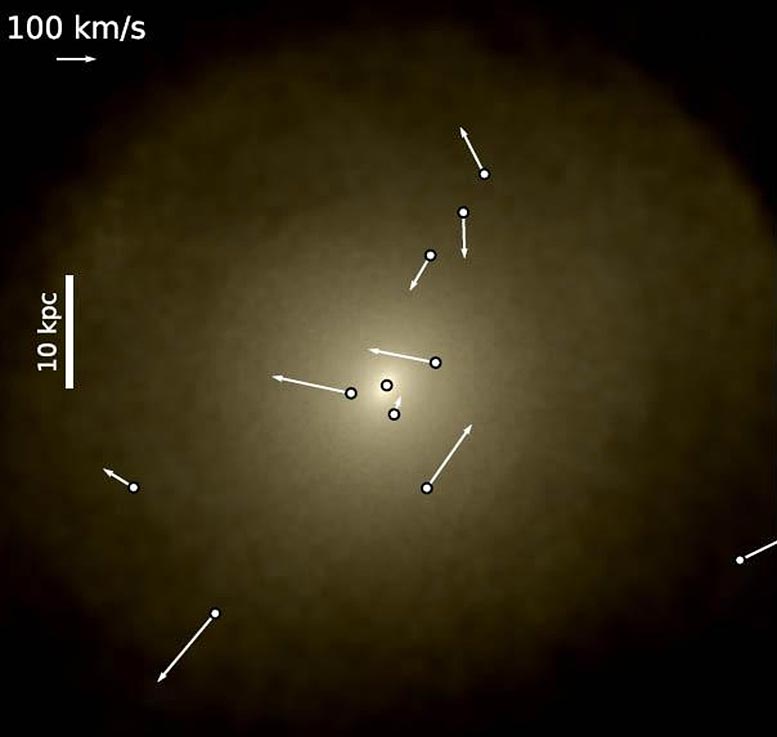 An image from the ROMULUS computer simulation showing an intermediate mass galaxy, its bright central region with its supermassive black hole, and the locations (and velocities) of “wandering” supermassive black holes (those not confined to the nucleus; the 10kpc marker corresponds to a distance of about 31 thousand light-years). Simulations have studied the evolution and abundances of wandering supermassive black holes; in the early universe they contain most of the mass that is in black holes. Credit: Ricarte et al, 2021

Every massive galaxy is believed to host a supermassive black hole (SMBH) at its center. Its mass is correlated with the mass of the inner regions of its host (and also with some other properties), probably because the SMBH grows and evolves as the galaxy itself grows, through mergers with other galaxies and the infall of material from the intergalactic medium. When material makes its way to the galactic center and accretes onto the SMBH, it produces an active galactic nucleus (AGN); outflows or other feedback from the AGN then act disruptively to quench star formation in the galaxy. Modern cosmological simulations now self-consistently trace star formation and SMBH growth in galaxies from the early universe to the present day, confirming these ideas.

The merger process naturally results in some SMBHs that are slightly offset from the center of the enlarged galaxy. The path to a single, combined SMBH is complex. Sometimes a binary SMBH is first formed which then gradually merges into one. Detectable gravitational wave emission can be produced in this process. However the merger can sometimes stall or be disrupted – understanding why is one of the key puzzles in SMBH evolution. New cosmological simulations with the ROMULUS code predict that even after billions of years of evolution some SMBHs do not join the nucleus but end up instead wandering through the galaxy.

CfA astronomer Angelo Ricarte led a team of colleagues characterizing such wandering black holes. Using the ROMULUS simulations the team finds that in today’s universe (that is, about 13.7 billion years after the big bang) about ten percent of the mass in black holes might be in wanderers. At earlier times in the universe, two billion years after the big bang or younger, these wanderers appear to be even more significant and contain most of the mass in black holes. Indeed, the scientists find that in these early epochs the wanderers also produce most of the emission coming from the SMBH population. In a related paper, the astronomers explore the observational signatures of the wandering SMBH population.

6 Comments on "Wandering Supermassive Black Holes Whizzing Through the Universe"