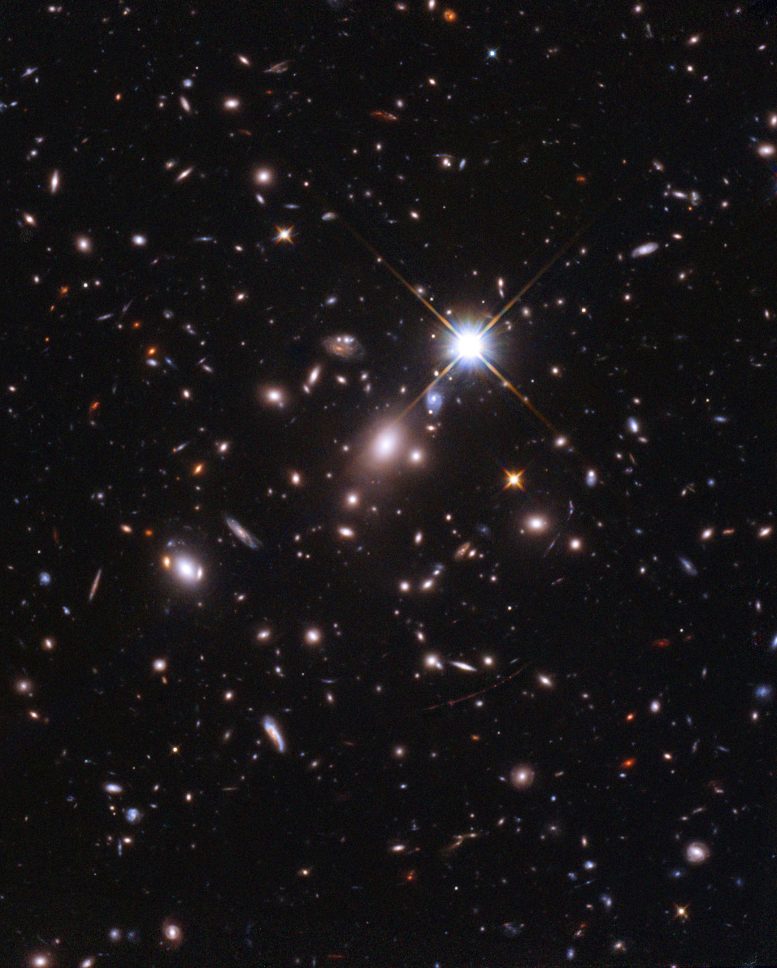 A lucky cosmic alignment has revealed a single source of light in the first billion years after the big bang, setting up a major confirmation for the James Webb Space Telescope in its rookie year.

Even NASA’s powerful Hubble Space Telescope can benefit from some assistance, as evidenced in its latest discovery: a record-breaking star so distant that a combination of the telescope’s sophisticated instrumentation and nature’s natural magnifying glass was needed to spot it. The star, nicknamed Earendel by astronomers, emitted its light within the universe’s first billion years. It’s a significant leap beyond Hubble’s previous distance record, in 2018, when it detected a star at around 4 billion years after the big bang. Hubble got a boost by looking through space warped by the mass of the huge galaxy cluster WHL0137-08, an effect called gravitational lensing. Earendel was aligned on or very near a ripple in the fabric of space created by the cluster’s mass, which magnified its light enough to be detected by Hubble. NASA’s James Webb Telescope will follow-up to learn about Earendel’s brightness, temperature, and composition. While the chances are slim that Earendel is one of the universe’s first-generation stars, astronomers are eager for its insights into the environment of the early universe. The star nicknamed Earendel (indicated with arrow) is positioned along a ripple in spacetime that gives it extreme magnification, allowing it to emerge into view from its host galaxy, which appears as a red smear across the sky. The whole scene is viewed through the distorted lens created by a massive galaxy cluster in the intervening space, which allows the galaxy’s features to be seen, but also warps their appearance—an effect astronomers call gravitational lensing. The red dots on either side of Earendel are one star cluster that is mirrored on either side of the ripple, a result of the gravitational lensing distortion. The entire galaxy, called the Sunrise Arc, appears three times, and knots along its length are more mirrored star clusters. Earendel’s unique position right along the line of most extreme magnification allows it to be detected, even though it is not a cluster. Credit: Science: NASA, ESA, Brian Welch (JHU), Dan Coe (STScI), Image Processing: NASA, ESA, Alyssa Pagan (STScI)

NASA’s Hubble Space Telescope has established an extraordinary new benchmark: detecting the light of a star that existed within the first billion years after the universe’s birth in the big bang—the farthest individual star ever seen to date.

The find is a huge leap further back in time from the previous single-star record holder; detected by Hubble in 2018. That star existed when the universe was about 4 billion years old, or 30 percent of its current age, at a time that astronomers refer to as “redshift 1.5.” Scientists use the word “redshift” because as the universe expands, light from distant objects is stretched or “shifted” to longer, redder wavelengths as it travels toward us.

The newly detected star is so far away that its light has taken 12.9 billion years to reach Earth, appearing to us as it did when the universe was only 7 percent of its current age, at redshift 6.2. The smallest objects previously seen at such a great distance are clusters of stars, embedded inside early galaxies.

“We almost didn’t believe it at first, it was so much farther than the previous most-distant, highest redshift star,” said astronomer Brian Welch of the Johns Hopkins University in Baltimore, lead author of the paper describing the discovery, which is published in the March 30, 2022 edition of the journal Nature. The discovery was made from data collected during Hubble’s RELICS (Reionization Lensing Cluster Survey) program, led by co-author Dan Coe at the Space Telescope Science Institute (STScI), also in Baltimore. This detailed view highlights the star Earendel’s position along a ripple in space-time (dotted line) that magnifies it and makes it possible for the star to be detected over such a great distance—nearly 13 billion light-years. Also indicated is a cluster of stars that is mirrored on either side of the line of magnification. The distortion and magnification are created by the mass of a huge galaxy cluster located in between Hubble and Earendel. The mass of the galaxy cluster is so great that it warps the fabric of space, and looking through that space is like looking through a magnifying glass—along the edge of the glass or lens, the appearance of things on the other side are warped as well as magnified. Credit: Science: NASA, ESA, Brian Welch (JHU), Dan Coe (STScI), Image Processing: NASA, ESA, Alyssa Pagan (STScI)

“Normally at these distances, entire galaxies look like small smudges, with the light from millions of stars blending together,” said Welch. “The galaxy hosting this star has been magnified and distorted by gravitational lensing into a long crescent that we named the Sunrise Arc.”

After studying the galaxy in detail, Welch determined that one feature is an extremely magnified star that he called Earendel, which means “morning star” in Old English. The discovery holds promise for opening up an uncharted era of very early star formation.

“Earendel existed so long ago that it may not have had all the same raw materials as the stars around us today,” Welch explained. “Studying Earendel will be a window into an era of the universe that we are unfamiliar with, but that led to everything we do know. It’s like we’ve been reading a really interesting book, but we started with the second chapter, and now we will have a chance to see how it all got started,” Welch said.

The research team estimates that Earendel is at least 50 times the mass of our Sun and millions of times as bright, rivaling the most massive stars known. But even such a brilliant, very high-mass star would be impossible to see at such a great distance without the aid of natural magnification by a huge galaxy cluster, WHL0137-08, sitting between us and Earendel. The mass of the galaxy cluster warps the fabric of space, creating a powerful natural magnifying glass that distorts and greatly amplifies the light from distant objects behind it.

Thanks to the rare alignment with the magnifying galaxy cluster, the star Earendel appears directly on, or extremely close to, a ripple in the fabric of space. This ripple, which is defined in optics as a “caustic,” provides maximum magnification and brightening. The effect is analogous to the rippled surface of a swimming pool creating patterns of bright light on the bottom of the pool on a sunny day. The ripples on the surface act as lenses and focus sunlight to maximum brightness on the pool’s floor.

This caustic causes the star Earendel to pop out from the general glow of its home galaxy. Its brightness is magnified a thousandfold or more. At this point, astronomers are not able to determine if Earendel is a binary star, though most massive stars have at least one smaller companion star.

Astronomers expect that Earendel will remain highly magnified for years to come. It will be observed by NASA’s James Webb Space Telescope. Webb’s high sensitivity to infrared light is needed to learn more about Earendel, because its light is stretched (redshifted) to longer infrared wavelengths due to the universe’s expansion.

“With Webb we expect to confirm Earendel is indeed a star, as well as measure its brightness and temperature,” Coe said. These details will narrow down its type and stage in the stellar lifecycle. “We also expect to find the Sunrise Arc galaxy is lacking in heavy elements that form in subsequent generations of stars. This would suggest Earendel is a rare, massive metal-poor star,” Coe said.

Earendel’s composition will be of great interest for astronomers, because it formed before the universe was filled with the heavy elements produced by successive generations of massive stars. If follow-up studies find that Earendel is only made up of primordial hydrogen and helium, it would be the first evidence for the legendary Population III stars, which are hypothesized to be the very first stars born after the big bang. While the probability is small, Welch admits it is enticing all the same.

“With Webb, we may see stars even farther than Earendel, which would be incredibly exciting,” Welch said. “We’ll go as far back as we can. I would love to see Webb break Earendel’s distance record.”