By Max Planck Institute for the Science of Human History October 5, 2021 A handaxe from the Thar Desert, where Acheulean populations persisted until at least 177 thousand years ago. Credit: Jimbob Blinkhorn

The longest lasting tool-making tradition in prehistory, known as the Acheulean, appears more than 1.5 million years ago in Africa and 1.2 million years ago in India, and mainly consists of stone handaxes and cleavers (Figure 1). New research led by the Max Planck Institute for the Science of Human History has re-examined a key Acheulean site at the margins of the monsoon zone in the Thar Desert, Rajasthan, revealing the presence of Acheulean populations until about 177,000 years ago, shortly before the earliest expansions of Homo sapiens across Asia.

The timing and route of the earliest expansions of our own species across Asia have been the focus of considerable debate but a growing body of evidence indicates Homo sapiens interacted with numerous populations of our closest evolutionary cousins. Identifying where these different populations met is critical to revealing the human and cultural landscape encountered by the earliest members of our species to expand beyond Africa. Although fossils of ancient human populations are extremely rare in South Asia, changes in the stone tool kits they made, used, and left behind can help resolve when and where these encounters may have occurred.

The youngest Acheulean in western India The site of Singi Talav, set on a lakeside close to the modern town of Didwana at the edge of the Thar Desert, was first excavated in the early 1980’s, revealing multiple stone tool assemblages (Figure 3). The largest assemblage shows a focus on the production of stone handaxes and cleavers that are typical of the Acheulean. However, the techniques needed to accurately date these assemblages were not available at the time of their discovery. Since then, a range of sites have been examined that constrain the chronology of Acheulean occupations in India, but the ecological settings of the sites remains poorly known.

“The lakeside setting has ideal preservation conditions for an archaeological site, enabling us to return 30 years after the first excavation and readily re-identify the main occupation horizons again,” says Dr. Jimbob Blinkhorn of the Max Planck Institute for the Science of Human History, the lead author of the study. “We’ve applied a range of modern methods to re-examine this critical site, including new approaches to directly date the occupation horizons and to reveal the vegetation in the landscape that Acheulean populations inhabited.” 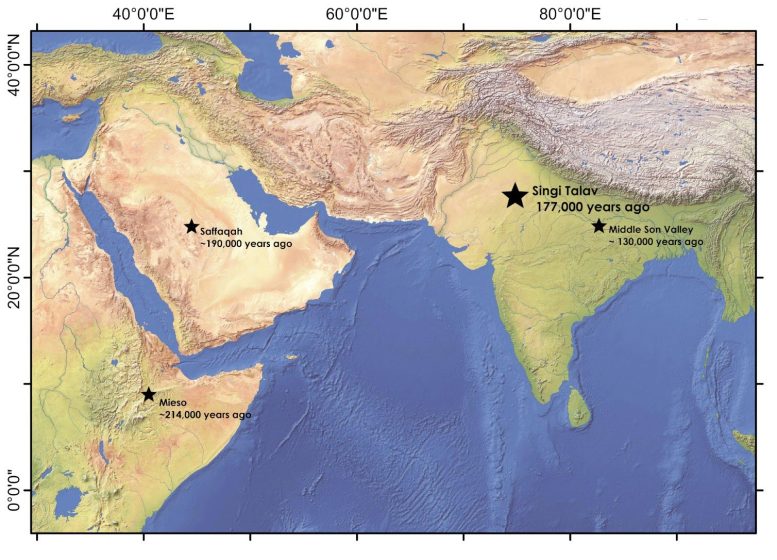 The researchers used luminescence methods to directly date the sediment horizons occupied by ancient human populations. These methods rely on the ability of minerals like quartz and feldspar to store and release energy induced by natural radioactivity, allowing scientists to determine the last time sediments were exposed to light.

“Ours is the first study to directly date the occupation horizons at Singi Talav, enabling us to understand both when ancient humans lived here and created the stone tool assemblages, and how these occupations compare with other sites across the region,” adds Dr. Julie Durcan of the University of Oxford.

At the margins of the monsoon

The Thar Desert sits at the western edge of the modern Indian summer monsoon system, and its habitability to ancient human populations likely fluctuated significantly. The researchers examined plant microfossils, known as phytoliths, as well as features of soil geochemistry to reveal the ecology of the site at the time the Acheulean toolkits were produced.

“This is the first time the ecology of an Acheulean site in India has been studied using these methods, revealing the broader character of the landscape that these populations inhabited,” says Prof Hema Achyuthan of Anna University, Chennai, who also participated in the original excavations at the site. “The results from the two methods we applied complement each other to reveal a landscape rich in the types of grasses that flourish during periods with enhanced summer monsoons.”

With this data, the study illuminates the environmental conditions that allowed Acheulean populations to thrive at the margins of the monsoon in the Thar Desert until at least 177,000 years ago.

“This supports evidence from across the region indicating that India hosted the youngest populations using Acheulean toolkits across the world,” adds Blinkhorn. “Critically, the late persistence of the Acheulean at Singi Talav and elsewhere in India directly precedes evidence for the appearance of our own species, Homo sapiens, as they expanded across Asia.”

The Thar Desert likely presented a key ecological frontier for expanding populations of Homo sapiens moving eastwards as they first met the Indian monsoon system. The results of this study suggest that this may have also been a demographic and behavioral frontier — a potential zone in which Homo sapiens encountered another, closely related, human population.