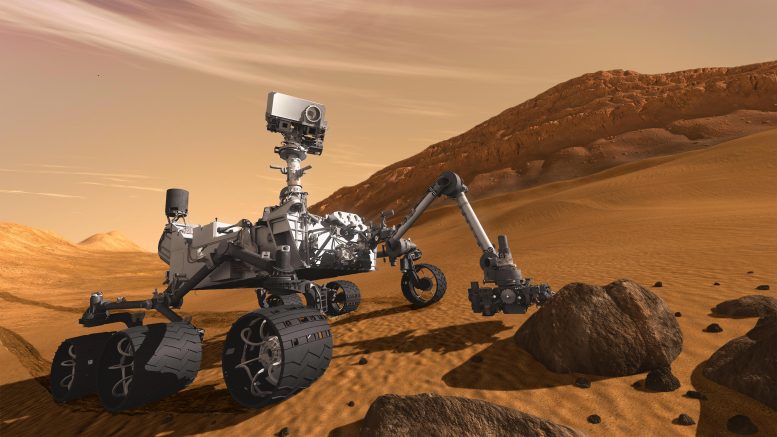 We’re heading back to Mars to search for any clues that might indicate life has or could exist on the big red planet. Of course, by ‘we’ I mean the new Mars Science Laboratory known as the Curiosity rover, the largest and most advanced rover that’s ever been sent to Mars.

The Curiosity is the size of a car or small SUV and weighs approximately a ton, with a scientific payload that’s ten times more massive than the instruments carried by previous rovers. A few of the tools the mobile lab is equipped with include cameras, a robotic arm, a drill, and a laser that can vaporize tiny segments of rock that can then be studied by onboard instruments.

“The MSL rover is essentially like a geologist in a self-contained laboratory,” says Wanda Harding, the MSL’s mission manager for the Launch Services Program, “and the capabilities that exist are probably the next best thing to sending a human to do the same job.” Since Curiosity is loaded with more equipment than previous rovers, a different power source was needed because the solar arrays that were used on earlier models wouldn’t provide enough power for the new MSL. To insure that power levels don’t become an issue, the Department of Energy built a nuclear-powered electrical system called a multi-mission radioisotope thermoelectric generator (MMRTG). The MMRTG converts heat from a small core of plutonium into approximately 110 watts of electricity, with the conversion process taking place around the clock all year long.

According to NASA, Curiosity will launch at 7:02 a.m. PST on Saturday, November 26th from Cape Canaveral in Florida. The 354 million-mile journey is expected to take more than eight months, with the rover landing on Mars in early August 2012.

Be the first to comment on "NASA Curiosity Heads to Mars"