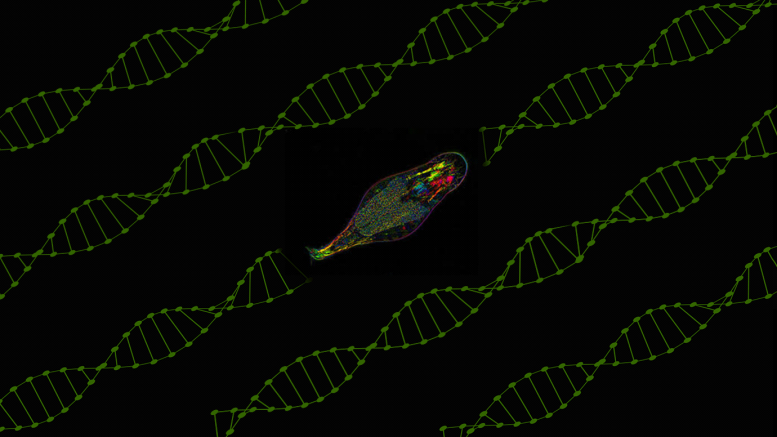 Scientists with the Marine Biological Laboratory discovered a new form of genetic modification in a tiny organism called a bdelloid rotifer (Adineta vaga, center, seen under a microscope). Credit: Microscope image courtesy of M. Shribak and I. Arkhipova

Your DNA holds the blueprint to build your body, but it’s a living document: Adjustments to the design can be made by epigenetic marks. Cataloguing these marks and how they work is important for understanding biology and genetics—and coming up with therapies to address diseases and disorders.

In humans and our fellow eukaryotes, two principal epigenetic marks are known. But a team from the University of Chicago-affiliated Marine Biological Laboratory has discovered a third, novel epigenetic mark—one formerly known only in bacteria—in small freshwater animals called bdelloid rotifers.

This fundamental and surprising discovery was reported on February 28, 2022, in Nature Communications.

“We discovered back in 2008 that bdelloid rotifers are very good at capturing foreign genes,” said senior author Irina Arkhipova, senior scientist in the Marine Biological Laboratory’s Josephine Bay Paul Center. “What we’ve found here is that rotifers, about 60 million years ago, accidentally captured a bacterial gene that allowed them to introduce a new epigenetic mark that was not there before.”

Epigenetic marks are modifications to DNA bases that don’t change the underlying genetic code, but “write” extra information on top of it that can be inherited along with your genome. Epigenetic marks usually regulate gene expression by turning genes on or off, particularly during early development or when your body is under stress. They can also suppress transposons, or “jumping genes” that may threaten the integrity of your genome.

This discovery marks the first time that a horizontally transferred gene—that is, a gene acquired from another organism not through sexual reproduction—has been shown to reshape the gene regulatory system in a eukaryote.

Yushenova explained how this process would have occurred: “Just try to picture, somewhere back in time, a piece of bacterial DNA happened to be fused to a piece of eukaryotic DNA. Both of them became joined in the rotifer’s genome and they formed a functional enzyme. That’s not so easy to do, even in the lab, and it happened naturally. And then this composite enzyme created this amazing regulatory system, and bdelloid rotifers were able to start using it to control all these jumping transposons. It’s like magic.”

Transposons, a term for genes that move around from one place to another inside your genome, can change genetic code for the better or worse, so keeping them in check is very important.

“You don’t want transposons jumping around in your genome,” said the study’s first author, Fernando Rodriguez, also a research scientist in Arkhipova’s lab. “They will mess things up, so you want to keep them in check. And the epigenetic system to accomplish that is different in different animals. In this case, a horizontal gene transfer from bacteria into bdelloid rotifers created a new epigenetic system in animals that hasn’t been described before.”

“Bdelloid rotifers, especially, have to keep their transposons in check because they primarily reproduce asexually,” Arkhipova said. “Asexual lineages have fewer means for suppressing proliferation of deleterious transposons, so adding an extra layer of protection could prevent a mutational meltdown. Indeed, transposon content is much lower in bdelloids than it is in sexual eukaryotes that don’t have this extra epigenetic layer in their genome defense system.”

In the two previously known epigenetic marks in eukaryotes, a methyl group is added to a DNA base, either cytosine or adenine. The team’s newly discovered mark is also a cytosine modification, but with a distinct bacterial-like positioning of the methyl group—essentially recapitulating evolutionary events of over two billion years ago, when the conventional epigenetic marks in early eukaryotes emerged.

Bdelloid rotifers are extremely resilient animals, as the Arkhipova and David Mark Welch labs at MBL have discovered over the years. They can completely dry up for weeks or months at a time, and then spring back to life when water becomes available. During their dry phases, their DNA breaks up into many pieces.

“When they rehydrate or otherwise render their DNA ends accessible, this might be an opportunity for foreign DNA fragments from ingested bacteria, fungi, or microalgae to transfer into the rotifer genome,” Arkhipova said. About 10 percent of the rotifer genome comes from non-metazoan sources, they have found.

Still, the Arkhipova lab was surprised to find a gene in the rotifer genome that resembled a bacterial methyltransferase (a methyltransferase is a kind of molecule that catalyzes the transfer of a methyl group to DNA). “We hypothesized that this gene conferred this new function of suppressing transposons, and we spent the last six years proving that, indeed, it does,” Arkhipova said.

It’s too early to know what the implications may be of discovering this new epigenetic system in rotifers. But parallel discoveries have had major impacts on biology.

“A good comparison is the CRISPR-Cas system in bacteria, which started out as a basic research discovery. Now CRISPR-Cas9 is used everywhere as a tool for gene editing in other organisms,” Rodriguez said. “This is a new system. Will it have applications, implications for future research? It’s hard to tell.”

The Marine Biological Laboratory is dedicated to scientific discovery – exploring fundamental biology, understanding marine biodiversity and the environment, and informing the human condition through research and education. Founded in Woods Hole, Massachusetts in 1888, the MBL is a private, nonprofit institution and an affiliate of the University of Chicago.