The world’s most powerful laser ignition facility is set to emphasize its nuclear weapons research after unsuccessfully campaigning to demonstrate the principles of a fusion power plant.

At the US National Ignition Facility (NIF), scientists and engineers have been working on how to focus the 192 laser beams on a gold lined “hohlraum” capsule, just a few millimeters long, containing a pellet of hydrogen isotopes. As 500 terawatts of laser power hits the capsule, it generates X-rays that blast into the pellet, causing the atoms of deuterium and tritium inside to fuse. This process converts a tiny amount of their mass into a burst of energy.

The goal was to develop a power plant that would implode nearly 1,000 pellets a minute, but unexpected technical problems left the NIF short of this campaign. 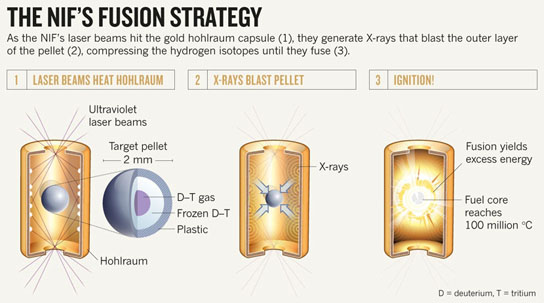 Federal officials and the US Congress are preparing to set a new direction for the $3.5-billion facility at the Lawrence Livermore National Laboratory in California. Ignition research will be cut down from 80% to 50%, and the National Nuclear Security Administration (NNSA) will determine what to do the rest of the time. The NNSA is planning on running experiments that mimic the conditions inside nuclear weapons, which will generate data to validate the computer codes used to check that the USA’s warheads remain viable. This is apparently essential work, given the voluntary moratorium on underground nuclear testing which began in 1992.

A fair amount of work is needed to get ignition to work successfully and produce significant amounts of power. One shot of the laser delivers 1.85 megajoules of energy. Based on the data obtained from the imploding pellets, researchers think that they are still far away from reaching the necessary conditions for ignition. Too much of the laser light is scattering back out of the capsule. Another problem is that the pellet is being squeezed asymmetrically, which lowers the pressure at its center. This asymmetry also causes the isotopes to mix unevenly, lowering the temperature.

Congress is disappointed in the NIF’s apparent lack of progress. The NIF is still decades away from using laser fusion to produce electricity. This was oversold to Congress, which believed that it was funding an energy project.

Livermore will still control the operation’s day-to-day running, but the NNSA headquartered in Washington DC will set priorities as the facility expands its work.