By University of Pennsylvania November 8, 2017 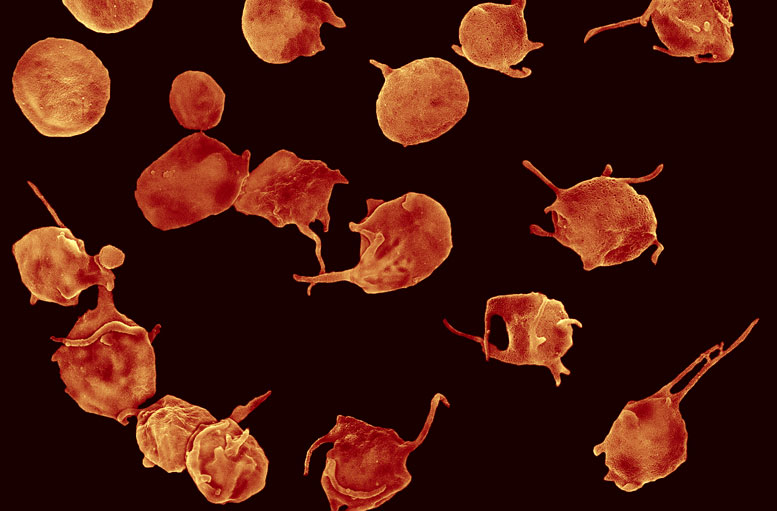 The first microscopic video of how a blood clot contracts at individual platelets provides biologists with a new look at a natural process of blood clotting.

The first view of the physical mechanism of how a blood clot contracts at the level of individual platelets is giving researchers from the Perelman School of Medicine at the University of Pennsylvania a new look at a natural process that is part of blood clotting. A team led by John W. Weisel, PhD, a professor of Cell and Developmental Biology, describes in Nature Communications how specialized proteins in platelets cause clots to shrink in size.

To learn how a clot contracts, the Penn team imaged clots (networks of fibrin fibers and blood platelets) using an imaging technique called confocal light microscopy. The natural process of clot contraction is necessary for the body to effectively stem bleeding, reduce the size of otherwise obstructive clots, and promote wound healing.

The physical mechanism of platelet-driven clot contraction they observed is already informing new ways to think about diagnosing and treating conditions such as ischemic stroke, deep vein thrombosis, and heart attacks. In all of these conditions, clots are located where they should not be and block blood flow to critical parts of the body. Evidence from a study published earlier this year from the Weisel lab suggests that platelets in people with these diseases are less effective at clot contraction, thereby contributing to clots being more obstructive.

“Under normal circumstances, blood clot contraction plays an important role in preventing bleeding by making a better seal, since the cells become tightly packed as the spaces between them are eliminated,” Weisel said. “In this study, we unwrapped and quantified clot contraction in single platelets.” The team quantified the structural details of how contracting platelets cause clots to shrink, accompanied by dramatic structural alterations of the platelet-fibrin meshwork.

Contraction in the microcosm of a clot entails successive steps by platelet extensions called filopodia attaching to fibrin fibers and pulling on them. “We found that activated platelets bend and shorten individual fibrin fibers with their filopodia, which undergo sequential extension and retraction, as if pulling hand-over-hand on a rope,” Weisel said.

The same basic proteins used by platelets are also used in movements in muscle and other cells. In contrast to other cell-movement systems in which cells migrate along fibers or reorganize the extracellular matrix, the “hand-over-hand” pulling causes the shortening and bending of platelet-attached fibers. The mechanism of blood clot contraction the investigators observed represents a new mode of contractility by cells to reshape biological tissue.

With a better understanding of clot contraction, Weisel and coauthors think that its contributions to both prevention of bleeding and thrombosis can be studied more effectively. They surmise that methods to measure clot contraction could be used for diagnosis of its effects on bleeding or thrombosis, and perhaps in the future these effects might even be modulated with therapeutic interventions.

The research was funded by the National Institutes of Health (U01HL116330, HL090774), a Scientist Development Grant from American Heart Association (17SDG33680177), the Walter Cancer Foundation, the Program for Competitive Growth at Kazan Federal University, and the National Science Foundation (DMR 1505662).

Coauthors are Oleg V. Kim and Rustem I. Litvinov, both from Penn, and Mark S. Alber, University of Notre Dame.