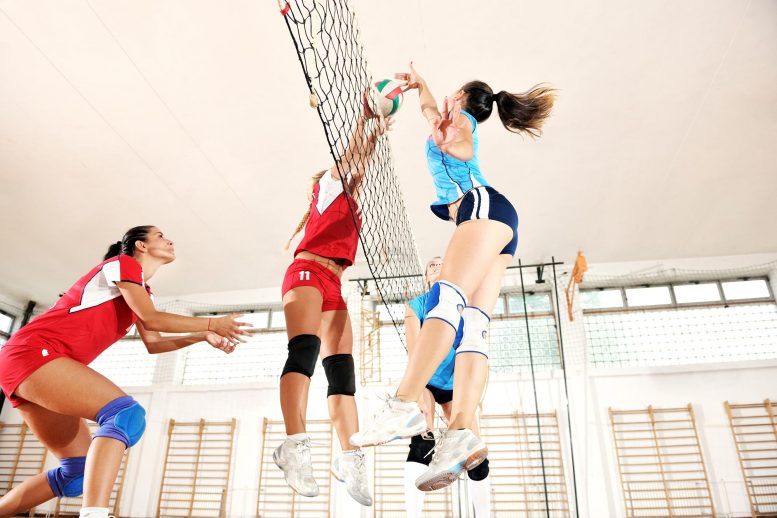 Artificial intelligence algorithms can predict the in-game actions of volleyball players with more than 80% accuracy.

New algorithms can predict the in-game actions of volleyball players with more than 80% accuracy. Now the Cornell Laboratory for Intelligent Systems and Controls, which developed the algorithms, is collaborating with the Big Red hockey team to expand the research project’s applications.

The algorithms are unique in that they take a holistic approach to action anticipation, combining visual data – for example, where an athlete is located on the court – with information that is more implicit, like an athlete’s specific role on the team.

“Computer vision can interpret visual information such as jersey color and a player’s position or body posture,” said Silvia Ferrari, who led the research. She is the John Brancaccio Professor of Mechanical and Aerospace Engineering. “We still use that real-time information, but integrate hidden variables such as team strategy and player roles, things we as humans are able to infer because we’re experts at that particular context.”

Ferrari and doctoral students Junyi Dong and Qingze Huo trained the algorithms to infer hidden variables by watching games – the same way humans gain their sports knowledge. The algorithms used machine learning to extract data from videos of volleyball games and then used that data to help make predictions when shown a new set of games.

Algorithms developed in Cornell’s Laboratory for Intelligent Systems and Controls can predict the in-game actions of volleyball players with more than 80% accuracy, and now the lab is collaborating with the Big Red hockey team to expand the research project’s applications.

The results were published in the journal ACM Transactions on Intelligent Systems and Technology on September 22, and show the algorithms can infer players’ roles – for example, distinguishing a defense-passer from a blocker – with an average accuracy of nearly 85%, and can predict multiple actions over a sequence of up to 44 frames with an average accuracy of more than 80%. The actions included spiking, setting, blocking, running, digging, squatting, standing, falling, and jumping.

Machine learning is a technique of using computers to detect patterns in massive datasets and then making predictions based on what the computer learns from those patterns. This makes machine learning a specific and narrow type of artificial intelligence.

Ferrari envisions teams using the algorithms to better prepare for competition by training them with existing game footage of an opponent and using their predictive abilities to practice specific plays and game scenarios.

Ferrari has filed for a patent and is currently working with the Big Red men’s hockey team to further develop the software. Using game footage provided by the team, Ferrari and her graduate students, led by Frank Kim, are designing algorithms that autonomously identify players, actions, and game scenarios. One goal of the project is to help annotate game film, which is a tedious task when performed manually by team staff members.

“Our program places a major emphasis on video analysis and data technology,” said Ben Russell, director of hockey operations for the Cornell men’s team. “We are constantly looking for ways to evolve as a coaching staff in order to better serve our players. I was very impressed with the research Professor Ferrari and her students have conducted thus far. I believe that this project has the potential to dramatically influence the way teams study and prepare for competition.” Beyond sports, the ability to anticipate human actions bears great potential for the future of human-machine interaction, according to Ferrari. She said that improved software can help autonomous vehicles make better decisions, bring robots and humans closer together in warehouses, and can even make video games more enjoyable by enhancing the computer’s artificial intelligence.

“Humans are not as unpredictable as the machine learning algorithms are making them out to be right now,” said Ferrari, who is also associate dean for cross-campus engineering research, “because if you actually take into account all of the content, all of the contextual clues, and you observe a group of people, you can do a lot better at predicting what they’re going to do.”