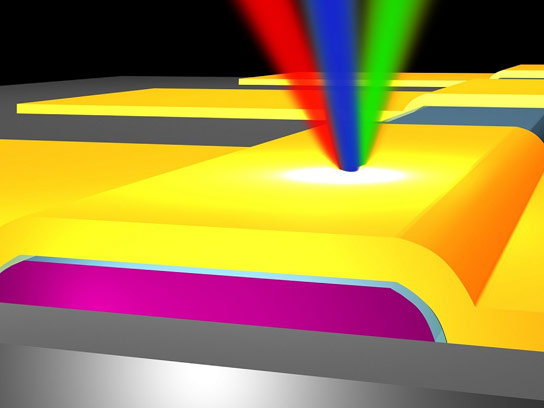 Three different-colored lasers are depicted converging on the gold top surface of a simple three-layer solid-state device that can determine light wavelengths. The intense light creates “hot” electrons that have enough energy to travel through a thin insulator (gray) into the conducting electrode (red) below. The level of opposing voltage sufficient to stop the hot-electron current indicates the light’s wavelength. The SLAC and Stanford scientists who created this structure correctly decoded the modulated signals from three different lasers. Graphic by Fuming Wang

In a new study, SLAC and Stanford scientists detail a new three-layer solid-state device can directly identify the wavelength of light that hits it.

Researchers at SLAC and Stanford have created a new device, smaller than a grain of rice, that could streamline optical data communications. It can directly identify the wavelength of light that hits it, and should scale down to the even tinier dimensions needed for multichannel optical data receivers on future generations of computer chips.

The device came out of a solar energy experiment conducted two years ago by Nicholas Melosh, a researcher with the Stanford Institute for Materials and Energy Sciences, a joint SLAC/Stanford institute, and graduate student Fuming Wang. They were testing how a layered thin-film chip generated electrons from the sun’s light and heat when they noticed that different wavelengths of light produced electrons with correspondingly different energies and electrical signatures.

This discovery led them to develop a new version of the chip, which has just three nanometer-scale layers: two metal electrodes (gold and titanium) sandwiching an insulating layer of titanium dioxide. Wang and Melosh reported their results in the April 16 issue of Nature Communications.

“Other wavelength detectors are either power dependent and must be used with reference measurements or use either a prism or grating, which spreads out the light, or wavelength-selective filters, both of which would be cumbersome on a chip,” Melosh said. “This is a new phenomenon.”

The new device is sensitive to all visible light as well as to part of the infrared spectrum. It works best with monochromatic light, which has a single, distinct wavelength, but was also able to correctly decode three overlapping signals from three different-colored lasers that were shined simultaneously onto the device.

Melosh said a key part of the design was matching the thickness of the top electrode to the distance that light-generated “hot” electrons would travel through that material, which for gold is 50 nanometers (billionths of a meter). Thus a large fraction of the hot electrons reach the sandwiched titanium oxide layer, which they pass through due to their high energy. The laser’s wavelength is identified by applying an opposing voltage sufficient to stop the hot-electron current. That voltage depends only on the light’s wavelength; the light’s intensity does not affect the measurement.

Melosh said the next steps are to make very small pixels, on the order of 100 nanometers square, into an array that can detect many wavelengths at once, and to tune the materials so they transfer electrons more efficiently with sensitivity over an even wider range of wavelengths, especially near commercial telecommunications wavelengths at 1,500 nanometers.