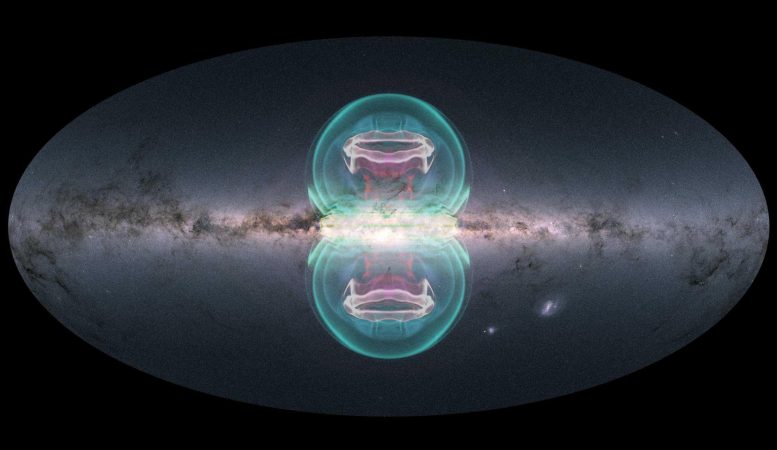 A scientist from Tokyo Metropolitan University has shown that large gamma-ray emitting bubbles around the center of our galaxy were produced by fast-blowing outward winds and the associated “reverse shock.” Numerical simulations successfully reproduced the temperature profile observed by an X-ray telescope. Such outflows have been observed in other galaxies; this finding suggests similar winds may have been blowing in our own galaxy until quite recently.

The universe is full of massive celestial objects which are yet to be explained. One of these is the “Fermi bubbles,” so-called because they were first discovered by the Fermi Gamma-ray Space Telescope in 2010. These bubbles are enormous gamma-ray emitting regions that extend either side of the center of our galaxy over approximately 50,000 light-years, protruding out from the plane of the galaxy like balloons as shown in the figure. Despite their mind-blowing scale, the mechanism by which they are formed is yet to be deciphered. Fast winds flowing out from the galactic center creates a forward shock and a reverse shock. The latter forms the outline of the Fermi bubbles. Credit: Tokyo Metropolitan University

Now, Professor Yutaka Fujita from Tokyo Metropolitan University has presented theoretical evidence demonstrating how such objects may have been formed. Since their discovery, many hypotheses have been put forward about the formation of the Fermi bubbles, including an explosive activity of the central supermassive black hole, winds from the black hole, and steady star formation activity. Telling these scenarios apart is a challenging task, but the availability of state-of-the-art X-ray observations from the Suzaku satellite gives us a chance to compare measurements with what we expect from various scenarios.

The simulations of Professor Fujita considered fast outflowing winds from the black hole injecting the necessary energy into the gas surrounding the center of the galaxy. Comparing with the measured profiles, they found that there was a good chance that the Fermi bubbles are produced by the fast outflowing winds, blowing at 1000km per second over 10 million years. These are not winds as we would experience them on earth, but streams of highly charged particles traveling at high speeds and propagating through space. These winds travel outwards and interact with surrounding “halo gas,” causing a “reverse shock” that creates a characteristic temperature peak. The Fermi bubbles correspond to the volume on the inside of this reverse shock front. Importantly, simulations also showed that an instantaneous explosion at the center could not reproduce the profiles measured by the telescope, lending weight to a scenario based on steady winds generated by the central black hole.

The author notes that the winds predicted by the simulation are similar to outflows observed in other galaxies. The correspondence suggests the same kinds of massive outflows seen in other parts of the universe were present in our own galaxy until fairly recently.

Reference: “Evidence for powerful winds and the associated reverse shock as the origin of the Fermi bubbles” by Yutaka Fujita, 12 November 2022, Monthly Notices of the Royal Astronomical Society.
DOI: 10.1093/mnras/stac3312