By University of Birmingham September 7, 2022 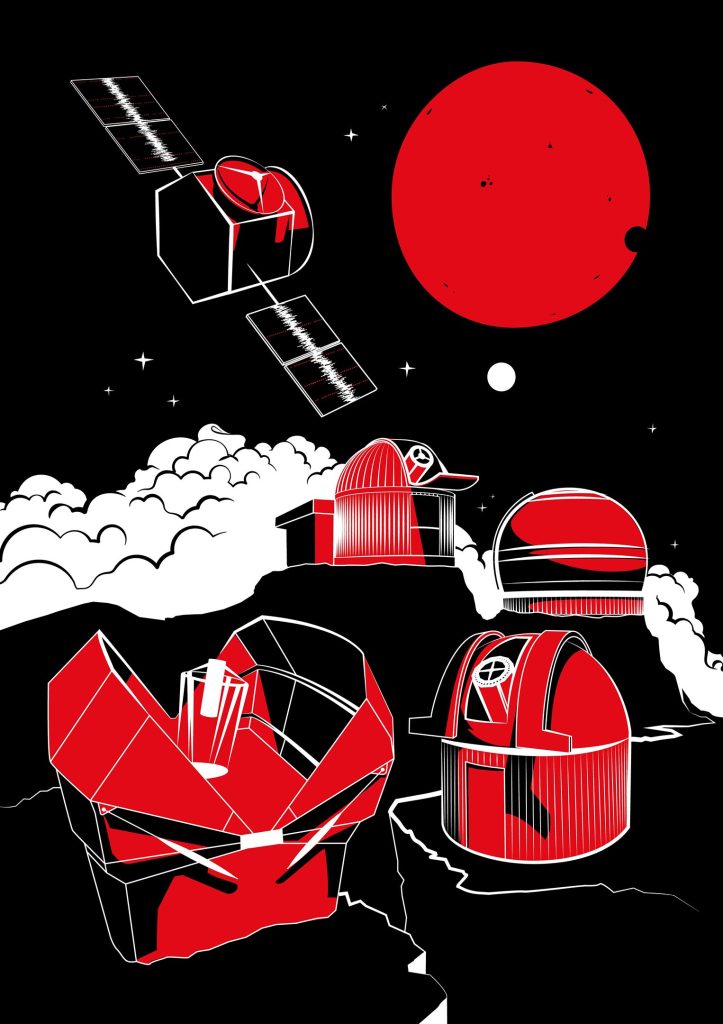 Artist’s view showing the red star and its two planets, together with some of the telescopes used for the discovery. The data that led to the discovery is depicted on the solar panels of the TESS satellite. Credit: University of Birmingham / Amanda J. Smith

An international research team has just announced the discovery of two “super-Earth” planets orbiting LP 890-9, a small, cool star located about 100 light-years from Earth. The star, also called TOI-4306 or SPECULOOS-2, is the second-coolest star found to host planets, after the famous TRAPPIST-1. This rare discovery is the subject of an upcoming publication in the journal Astronomy & Astrophysics.

LP 890-9b, the system’s inner planet, is about 30% larger than Earth and completes an orbit around the star in just 2.7 days. This first exoplanet was initially identified as a possible planet candidate by NASA’s Transiting Exoplanet Survey Satellite (TESS), a space mission searching for exoplanets orbiting nearby stars. This candidate was confirmed and characterized by the SPECULOOS (Search for habitable Planets EClipsing ULtra-cOOl Stars) telescopes, one of which is operated by the University of Birmingham. SPECULOOS astronomers then used their telescopes to search for additional transiting planets in the system that could have been missed by TESS.

“TESS searches for exoplanets using the transit method, by monitoring the brightness of thousands of stars simultaneously, looking for slight dimmings that might be caused by planets passing in front of their stars,” explains Laetitia Delrez, a postdoctoral researcher at the University of Liège, and the lead author of the new research article.

“However, a follow-up with ground-based telescopes is often necessary to confirm the planetary nature of the detected candidates and to refine the measurements of their sizes and orbital properties.”

This follow-up is particularly important in the case of very cold stars, such as LP 890-9. This is because they emit most of their light in the near-infrared, a wavelength for which TESS has a rather limited sensitivity.

On the other hand, the telescopes of the SPECULOOS project, which are installed at ESO’s Paranal Observatory in Chile and on the island of Tenerife, are optimized to observe this type of star with high precision. This is because they have cameras that are very sensitive to near-infrared wavelengths.

“The goal of SPECULOOS is to search for potentially habitable terrestrial planets transiting some of the smallest and coolest stars in the solar neighborhood, such as the TRAPPIST-1 planetary system, which we discovered in 2016,” recalls Michaël Gillon, from the University of Liège, and the principal investigator of the SPECULOOS project. “This strategy is motivated by the fact that such planets are particularly well suited to detailed studies of their atmospheres and to the search for possible chemical traces of life with large observatories, such as the James Webb Space Telescope (JWST).”

The observations made by SPECULOOS of LP 890-9 proved quite fruitful as they not only confirmed the first planet, but they were critical for the detection of a second, previously unknown exoplanet. This second planet, LP 890-9c (renamed SPECULOOS-2c by the SPECULOOS researchers), is similar in size to the first (about 40% larger than Earth) but has a longer orbital period of about 8.5 days. This orbital period, later confirmed with the MuSCAT3 instrument in Hawaii, places the planet in the so-called “habitable zone” around its star.

“The habitable zone is a concept under which a planet with similar geological and atmospheric conditions as Earth, would have a surface temperature allowing water to remain liquid for billions of years” explains Amaury Triaud. He is a professor of Exoplanetology at the University of Birmingham and the leader of the SPECULOOS working group that scheduled the observations leading to the discovery of the second planet. “This gives us a license to observe more and find out whether the planet has an atmosphere, and if so, to study its content and assess its habitability.”

The next step will be to study the atmosphere of this planet, for example with the JWST. LP 890-9c appears to be the second-most favorable target for the JWST among the potentially habitable terrestrial planets known so far, surpassed only by the TRAPPIST-1 planets (for which Professor Triaud was also a co-discoverer).

“It is important to detect as many temperate terrestrial worlds as possible to study the diversity of exoplanet climates, and eventually to be in a position to measure how frequently biology has emerged in the Cosmos,” added Professor Triaud.

Birmingham’s funding for this research came from the European Research Council (ERC) grant BEBOP, as well as two grants from the Science and Technology Facilities Council (STFC) and an investment by the University of Birmingham to purchase a SPECULOOS telescope.