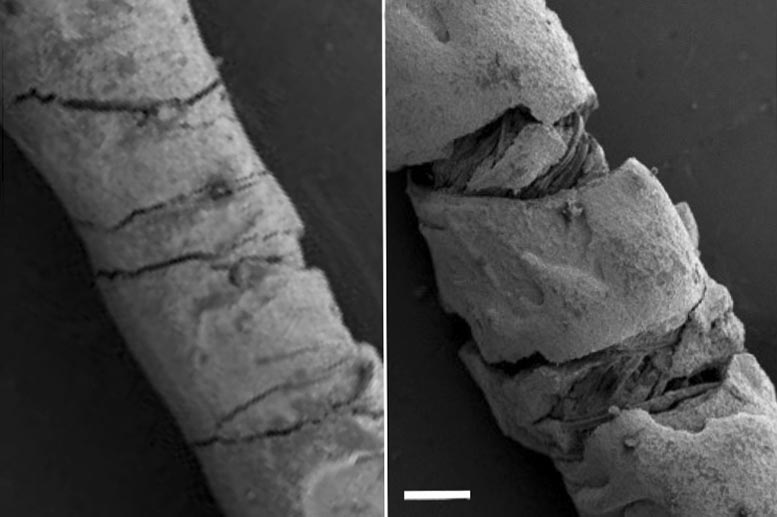 Engineers created thread sensors that can be attached to skin to measure movement in real-time, with potential implications for tracking health and performance.

Engineers at Tufts University have created and demonstrated flexible thread-based sensors that can measure movement of the neck, providing data on the direction, angle of rotation and degree of displacement of the head. The discovery raises the potential for thin, inconspicuous tattoo-like patches that could, according to the Tufts team, measure athletic performance, monitor worker or driver fatigue, assist with physical therapy, enhance virtual reality games and systems, and improve computer-generated imagery in cinematography. The technology, described today (January 29, 2021) in Scientific Reports, adds to a growing number of thread-based sensors developed by Tufts engineers that can be woven into textiles, measuring gases and chemicals in the environment or metabolites in sweat.

In their experiments, the researchers placed two threads in an “X” pattern on the back of a subject’s neck. Coated with an electrically conducting carbon-based ink, the sensors detect motion when the threads bend, creating strain that changes the way they conduct electricity. When the subject performed a series of head movements, the wires sent signals to a small Bluetooth module, which then transmitted data wirelessly to a computer or smartphone for analysis.

The data analysis involved sophisticated machine learning approaches to interpret the signals and translate them to quantitate head movements in real-time, with 93% accuracy. In this way, the sensors and processor track motion without interference from wires, bulky devices, or limiting conditions such as the use of cameras, or confinement to a room or lab space.

While algorithms will need to be specialized for each location on the body, the proof of principle demonstrates that thread sensors could be used to measure movement in other limbs, according to the researchers. The skin patches or even form-fitting clothing containing the threads could be used to track movement in settings where the measurements are most relevant, such as in the field, the workplace, or a classroom. The fact that a camera is not needed provides for additional privacy.

“This is a promising demonstration of how we could make sensors that monitor our health, performance, and environment in a non-intrusive way,” said Yiwen Jiang, an undergraduate student at Tufts University School of Engineering and first author of the study. “More work needs to be done to improve the sensors’ scope and precision, which in this case could mean gathering data from a larger array of threads regularly spaced or arranged in a pattern, and developing algorithms that improve the quantification of articulated movement.”

Other types of wearable motion sensor designs have included 3-axis gyroscopes, accelerometers and magnetometers to detect movement of the subject in relation to their surroundings. Those sensors are based on inertial measurements — quantifying how the body accelerates, rotates or moves up and down -and tend to be bulkier and more inconvenient. For example, with other systems, in order to measure head movement, it is necessary to place one sensor on the forehead and another on the neck above the vertebrae. The obtrusive placement of equipment can interfere with the subjects’ free movement or simply the convenience of not being conscious of being measured.

For situations such as on the athletic field, the novel thread-based sensor paradigm could be a game changer. By placing thin tattoo-like patches on different joints, an athlete could carry motion sensors to detect their physical movement and form, while thread-based sweat sensors, described in earlier work by the Tufts team, could also potentially track their electrolytes, lactate and other biological markers of performance in sweat.

On the road, a thread sensor patch could alert to truck driver fatigue or other situations where tracking operator alertness is critical, monitoring the head movements of someone about to nod off.

“If we can take this technology further, there could be a wide range of applications in healthcare as well,” said Jiang. “For example, those researching Parkinson’s disease and other neuromuscular diseases could also track movements of subjects in their normal settings and daily lives to gather data on their condition and the effectiveness of treatments.”

“The objective in creating thread-based sensors is to make them ‘disappear’ as far as the person wearing them is concerned,” said Sameer Sonkusale, professor of electrical and computer engineering at Tufts’ School of Engineering, director of the Tufts Nanolab, and corresponding author of the study. “Creating a coated thread capable of measuring movement is a remarkable achievement, made even more notable by the fact that Yiwen developed this invention as an undergraduate. We look forward to refining the technology and exploring its many possibilities.”