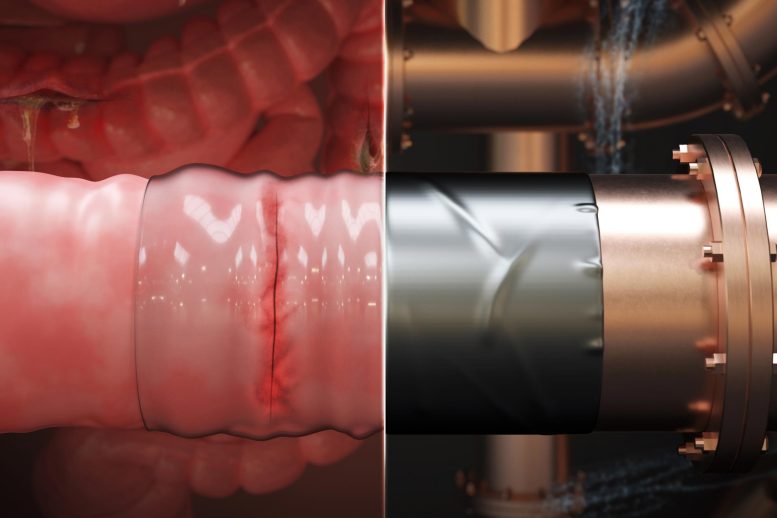 A new MIT-designed surgical sticky tape can be applied quickly and easily, like duct tape to a pipe, to repair leaks and tears in the gastrointestinal tract and other tissues and organs. Credit: Courtesy of the researchers

The sticky patch could be quickly applied to repair gut leaks and tears.

A staple on any engineer’s workbench, duct tape is a quick and dependable fix for cracks and tears in many structural materials. MIT engineers have now developed a kind of surgical duct tape — a strong, flexible, and biocompatible sticky patch that can be easily and quickly applied to biological tissues and organs to help seal tears and wounds.

Like duct tape, the new patch is sticky on one side and smooth on the other. In its current formulation, the adhesive is targeted to seal defects in the gastrointestinal tract, which the engineers describe as the body’s own biological ductwork.

In numerous experiments, the team has shown the patch can be quickly stuck to large tears and punctures in the colon, stomach, and intestines of various animal models. The adhesive binds strongly to tissues within several seconds and holds for over a month. It is also flexible, able to expand and contract with a functioning organ as it heals. Once an injury is fully healed, the patch gradually degrades without causing inflammation or sticking to surrounding tissues.

The team envisions the surgical sticky patch could one day be stocked in operating rooms and used as a fast and safe alternative or reinforcement to hand-sewn sutures to repair leaks and tears in the gut and other biological tissues.

“We think this surgical tape is a good base technology to be made into an actual, off-the-shelf product,” says Hyunwoo Yuk, a research scientist in MIT’s Department of Mechanical Engineering. “Surgeons could use it as they use duct tape in the nonsurgical world. It doesn’t need any preparation or prior step. Just take it out, open, and use.”

Yuk, the study’s co-lead and co-corresponding author, and his colleagues published their results on February 2, 2022, in the journal Science Translational Medicine. Other co-authors include MIT postdoc and lead author Jingjing Wu; project supervisor and co-corresponding author Xuanhe Zhao, who is a professor of mechanical engineering and of civil and environmental engineering at MIT; and collaborators from the Mayo Clinic and the Southern University of Science and Technology.

The new surgical duct tape builds on the team’s 2019 design for a double-sided tape. That early iteration comprised a single layer that was sticky on both sides and designed to join two wet surfaces together.

The adhesive was made from polyacrylic acid, an absorbent material found in diapers, which starts out dry and absorbs moisture when in contact with a wet surface or tissue, temporarily sticking to the tissue in the process. The researchers mixed into the material NHS esters, chemical compounds that can bind with proteins in the tissue to form stronger bonds. Finally, they reinforced the adhesive with gelatin or chitosan — natural ingredients that kept the tape’s shape.

The researchers found the double-sided tape strongly bonded different tissues together. But when consulting with surgeons, they realized that a single-sided version might make a more practical impact.

“In practical situations, it’s not common to have to stick two tissues together —organs need to be separate from each other,” Wu says. “One suggestion was to use this sticky element to repair leaks and defects in the gut.”

Surgeons typically repair leaks and tears in the gastrointestinal tract with surgical sutures. But sewing the stitches requires precision and training, and following surgery the sutures can trigger scarring around the injury. The tissue between stitches could also tear, causing secondary leakages that could lead to sepsis.

“We thought, maybe we could turn our sticky element into a product to repair gut leaks, similar to sealing pipes with duct tape,” Wu says. “That pushed us toward something more like single-sided tape.”

The researchers first tuned their adhesive recipe, replacing gelatin and chitosan with a longer-lasting hydrogel — in this case, polyvinyl alcohol. This swap kept the adhesive physically stable for over a month, long enough for a typical gut injury to heal. They also added a second, nonsticky top layer to keep the patch from sticking to surrounding tissue. This layer was made from a biodegradable polyurethane that has about the same stretch and stiffness of natural gut tissue.

“We don’t want the patch to be weaker than tissue because otherwise it would risk bursting,” Yuk says. “We also don’t want it to be stiffer because it would restrict the peristaltic movement in guts that is essential for digestion.”

In initial tests, the patch did stick to tissues, but it also swelled, just as a fully wet, hydrogel-based diaper would. This swelling stretched the tape and the underlying tear it was intended to seal.

“It was almost an impossible problem because hydrogel naturally swells,” Yuk says. “But we did a simple trick: We prestretched the adhesive layer a bit, then introduced the nonadhesive layer, so that when applied to a tissue, that prestretching cancels out the swelling.”

The team then carried out experiments to test the patch’s properties and performance. When the patch was placed in a culture with human epithelial cells, the cells continued to grow, showing that the patch is biocompatible. When implanted under the skin of rats, the patch biodegraded after about 12 weeks, with no toxic effects.

The researchers also applied the patch to defects in the animals’ colons and stomachs, and found it maintained a strong bond as the injuries fully healed. It also produced minimal scarring and inflammation compared with repairs made with conventional sutures.

Finally, the team applied the patch over colon defects in pigs, and observed that the animals continued to feed normally, with no fever, lethargy, or other adverse health effects. After four weeks, the defects fully healed, with no sign of secondary leakage.

Taken together, the experiments suggest that the surgical patch could potentially safely repair gastrointestinal injuries, and could be applied just as easily as commercial duct tape. Yuk and Zhao are further developing the adhesive through a new startup and hope to pursue FDA approval to test the patch in medical settings.

“We are studying a fundamental mechanics problem, adhesion, in an extremely challenging environment, inside the body. There are millions of surgeries worldwide a year to repair gastrointestinal defects, and the leakage rate is up to 20 percent in high-risk patients,” Zhao says. “This tape could solve that problem, and potentially save thousands of lives.”

This work was supported by the MIT Deshpande Center and the Centers for Mechanical Engineering Research and Education at MIT, and SUSTech.