By Ulsan National Institute of Science and Technology December 18, 2013 Researchers from UNIST have developed a method for mass producing boron/nitrogen co-doped graphene nanoplatelets, opening the door for future use in electronic devices.

Ulsan National Institute of Science and Technology (UNIST) announced a method for the mass production of boron/nitrogen co-doped graphene nanoplatelets, which led to the fabrication of a graphene-based field -effect transistor (FET) with semiconducting nature. This opens up opportunities for practical use in electronic devices.

The Ulsan National Institute of Science and Technology (UNIST) research team led by Prof. Jong-Beom Baek have discovered an efficient method for the mass production of boron/nitrogen co-doped graphene nanoplatelets (BCN-graphene) via a simple solvothermal reaction of BBr3/CCl4/N2 in the presence of potassium. This work was published in “Angewandte Chemie International Edition” as a VIP (“Very Important Paper”).

Since graphene was experimentally discovered in 2004, it has been the focus of vigorous applied research due to its outstanding properties such as high specific surface area, good thermal and electrical conductivities, and many more properties.

However, its Achilles heel is a vanishing band-gap for semiconductor application. As a result, it is not suitable for logic applications, because devices cannot be switched off. Therefore, graphene must be modified to produce a band-gap, if it is to be used in electronic devices. 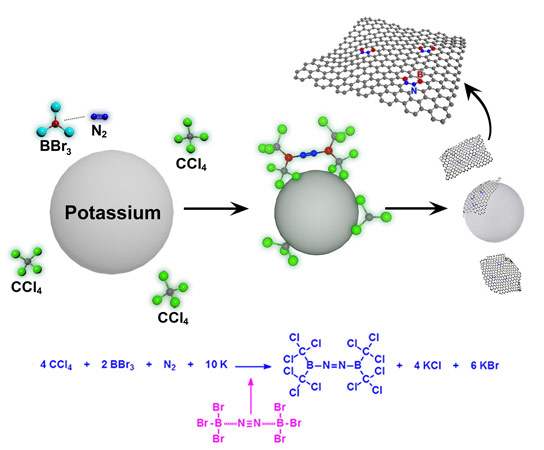 This is a schematic representation for the formation of BCN-graphene via solvothermal reaction between carbon tetrachloride (CCl4) boron tribromide (BBr3) and nitrogen (N2) in the presence of potassium (K). Credit: UNIST

Various methods of making graphene-based field effect transistors (FETs) have been exploited, including doping graphene, tailoring graphene-like a nanoribbon, and using boron nitride as a support. Among the methods of controlling the band-gap of graphene, doping methods show the most promise in terms of industrial scale feasibility.

Although world leading researchers have tried to add boron into graphitic framework to open its band-gap for semiconductor applications, there has not been any notable success yet. Since the atomic size of boron (85 pm) is larger than that of carbon (77 pm), it is difficult to accommodate boron into the graphitic network structure.

A new synthetic protocol developed by a research team from UNIST, a leading Korean university, has revealed that boron/nitrogen co-doping is only feasible when carbon tetrachloride (CCl4 ) is treated with boron tribromide (BBr3 ) and nitrogen (N2) gas.

In order to help boron-doping into graphene structure, the research team used nitrogen (70 pm), which is a bit smaller than carbon and boron. The idea was very simple, but the result was surprising. Pairing two nitrogen atoms and two boron atoms can compensate for the atomic size mismatch. Thus, boron and nitrogen pairs can be easily introduced into the graphitic network. The resultant BCN-graphene generates a band-gap for FETs.

“Although the performance of the FET is not in the ranges of commercial silicon-based semiconductors, this initiative work should be the proof of a new concept and a great leap forward for studying graphene with band-gap opening,” said Prof. Jong-Beom Baek.

“I believe this work is one of the biggest advancements in considering the viability of a simple synthetic approach,” said Ph.D. candidate Sun-Min Jung, the first author of this article.

Prof. Baek explains the next step: “Now, the remaining challenge is fine-tuning a band-gap to improve the on/off current ratio for real device applications.”