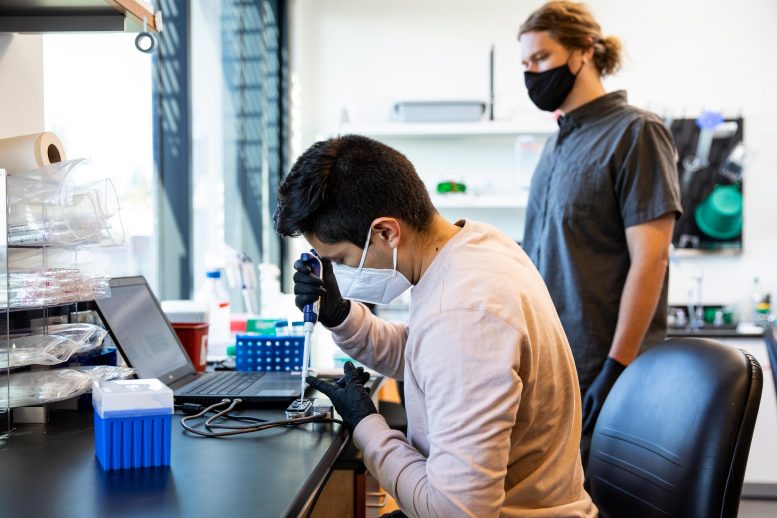 But conventional reporting schemes that rely on fluorescence and other optical approaches come with practical limitations that could cast a shadow over the field’s future progress. Now, researchers at the University of Washington and Microsoft have created a “nanopore-tal” into what is happening inside these complex biological systems, allowing scientists to see reporter proteins in a whole new light.

The team introduced a new class of reporter proteins that can be directly read by a commercially available nanopore sensing device. The new system — dubbed “Nanopore-addressable protein Tags Engineered as Reporters” or “NanoporeTERs” — can detect multiple protein expression levels from bacterial and human cell cultures far beyond the capacity of existing techniques.

The study was published on August 12, 2021, in Nature Biotechnology. University of Washington and Microsoft researchers have introduced a new class of reporter proteins that can be directly read by a commercially available nanopore sensing device. Raw nanopore signals stream from the MinION device, which contains an array of hundreds of nanopore sensors. Each color represents data from an individual nanopore. The team uses machine learning to interpret these signals as NanoporeTERs barcodes. Credit: Dennis Wise/University of Washington

“NanoporeTERs offer a new and richer lexicon for engineered cells to express themselves and shed new light on the factors they are designed to track. They can tell us a lot more about what is happening in their environment all at once,” said co-lead author Nicolas Cardozo, a doctoral student with the UW Molecular Engineering and Sciences Institute. “We’re essentially making it possible for these cells to ‘talk’ to computers about what’s happening in their surroundings at a new level of detail, scale and efficiency that will enable deeper analysis than what we could do before.”

For conventional labeling methods, researchers can track only a few optical reporter proteins, such as green fluorescent protein, simultaneously because of their overlapping spectral properties. For example, it’s difficult to distinguish between more than three different colors of fluorescent proteins at once. In contrast, NanoporeTERs were designed to carry distinct protein “barcodes” composed of strings of amino acids that, when used in combination, allow at least ten times more multiplexing possibilities.

These synthetic proteins are secreted outside of a cell into the surrounding environment, where researchers can collect and analyze them using a commercially available nanopore array. Here, the team used the Oxford Nanopore Technologies MinION device. The researchers engineered the NanoporeTER proteins with charged “tails” so that they can be pulled into the nanopore sensors by an electric field. Then the team uses machine learning to classify the electrical signals for each NanoporeTER barcode in order to determine each protein’s output levels.

“This is a fundamentally new interface between cells and computers,” said senior author Jeff Nivala, a UW research assistant professor in the Paul G. Allen School of Computer Science & Engineering. “One analogy I like to make is that fluorescent protein reporters are like lighthouses, and NanoporeTERs are like messages in a bottle.

“Lighthouses are really useful for communicating a physical location, as you can literally see where the signal is coming from, but it’s hard to pack more information into that kind of signal. A message in a bottle, on the other hand, can pack a lot of information into a very small vessel, and you can send many of them off to another location to be read. You might lose sight of the precise physical location where the messages were sent, but for many applications that’s not going to be an issue.”

As a proof of concept, the team developed a library of more than 20 distinct NanoporeTERs tags. But the potential is significantly greater, according to co-lead author Karen Zhang, now a doctoral student in the UC Berkeley-UCSF bioengineering graduate program.

“We are currently working to scale up the number of NanoporeTERs to hundreds, thousands, maybe even millions more,” said Zhang, who graduated this year from the UW with bachelor’s degrees in both biochemistry and microbiology. “The more we have, the more things we can track.

“We’re particularly excited about the potential in single-cell proteomics, but this could also be a game-changer in terms of our ability to do multiplexed biosensing to diagnose disease and even target therapeutics to specific areas inside the body. And debugging complicated genetic circuit designs would become a whole lot easier and much less time-consuming if we could measure the performance of all the components in parallel instead of by trial and error.”

These researchers have made novel use of the MinION device before, when they developed a molecular tagging system to replace conventional inventory control methods. That system relied on barcodes comprising synthetic strands of DNA that could be decoded on demand using the portable reader.

This time, the team went a step further.

“This is the first paper to show how a commercial nanopore sensor device can be repurposed for applications other than the DNA and RNA sequencing for which they were originally designed,” said co-author Kathryn Doroschak, a computational biologist at Adaptive Biotechnologies who completed this work as a doctoral student at the Allen School. “This is exciting as a precursor for nanopore technology becoming more accessible and ubiquitous in the future. You can already plug a nanopore device into your cell phone. I could envision someday having a choice of ‘molecular apps’ that will be relatively inexpensive and widely available outside of traditional genomics.”

Additional co-authors of the paper are Aerilynn Nguyen at Northeastern University and Zoheb Siddiqui at Amazon, both former UW undergraduate students; Nicholas Bogard at Patch Biosciences, a former UW postdoctoral research associate; Luis Ceze, an Allen School professor; and Karin Strauss, an Allen School affiliate professor and a senior principal research manager at Microsoft. This research was funded by the National Science Foundation, the National Institutes of Health and a sponsored research agreement from Oxford Nanopore Technologies.

Identifying Individual Molecules: How to Build a Better “Nanopore” Biosensor

Sequencing Key Molecules in Just Minutes Instead of Years