Anotheca spinosa, a tree frog from Central America, likely uses the bony spikes on its skull as a defense against predators. Credit: Edward Stanley/Florida Museum

Many frogs look like a water balloon with legs, but don’t be fooled. Beneath slick skin, some species sport spines, spikes, and other skeletal secrets.

While most frogs share a simple skull shape with a smooth surface, others have evolved fancier features, such as faux fangs, elaborate crests, helmet-like fortification and venom-delivering spikes. A new study is the first to take a close look at the evolution and function of these armored frog skulls.

Florida Museum of Natural History researchers used 3D data to study skull shape in 158 species representing all living frog families. Radically shaped skulls were often covered in intricate patterns of grooves, ridges and pits formed by extra layers of bone. The research team found that this trait, known as hyperossification, has evolved more than 25 times in frogs. Species with the same feeding habits or defenses tended to develop similarly shaped and patterned skulls, even if they were separated by millions of years of evolution. Hemiphractus scutatus, a horned frog from South America, can prey on other vertebrates, thanks to its wide skull with a large gape. This species also has fanglike structures on its lower jaw. Credit: Edward Stanley/Florida Museum

“Superficially, frogs may look similar, but when you look at their skulls, you see drastic differences,” said Daniel Paluh, the study’s lead author and a University of Florida doctoral student. “Some of the weirdest skulls are found in frogs that eat birds and mammals, use their heads as a shield, or in a few rare cases, are venomous. Their skulls show how strange and diverse frogs can be.”

The last comprehensive study of frog skulls was published in 1973. Since then, scientists have doubled the number of described frog species, updated our understanding of their evolutionary relationships and developed new analytical techniques with the help of CT scanning.

This enabled Paluh to use 36 landmarks on frog skulls, scanned and digitized as part of the National Science Foundation-funded oVert project, to analyze and compare shapes across the frog tree of life.

“Before we had methods to digitize specimens, really the only way to quantify shape was to take linear measurements of each skull,” he said.

Not only do hyperossification and bizarre skull shapes tend to appear together, Paluh found, but they are often associated with frogs that eat either very large prey or use their heads for defense. 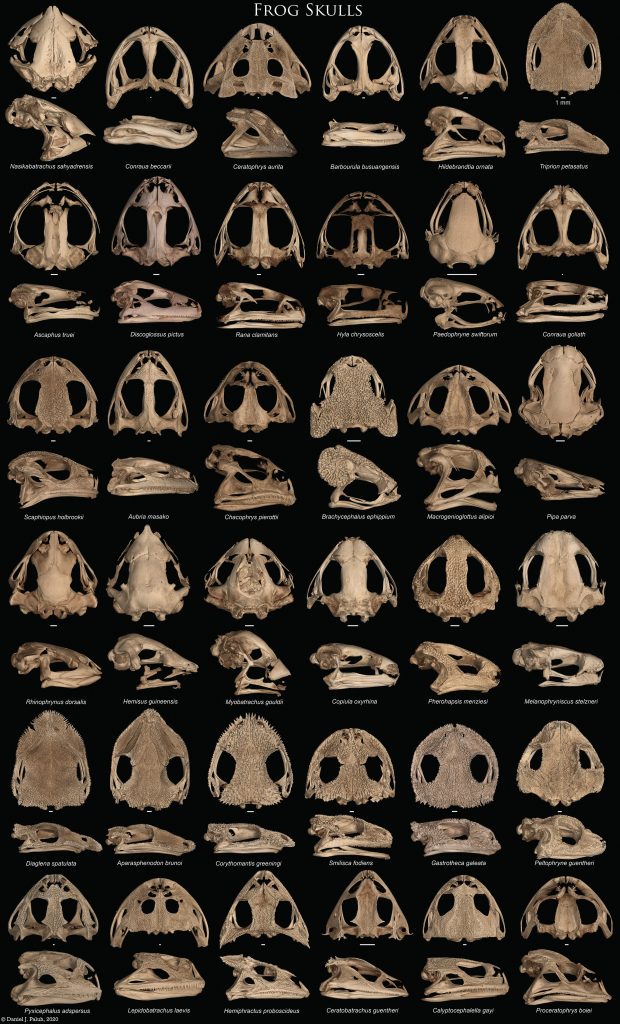 Frogs that eat other vertebrates — birds, reptiles, other frogs and mice — often have giant, roomy skulls, with a jaw joint near the back. This gives them a bigger gape with which to scoop up their prey, Paluh said, referencing Pacman frogs as one example. His analysis showed these species’ skulls are stippled with tiny pits, which could provide extra strength and bite force.

Nearly all frogs lack teeth on their lower jaw, but some, such as Budgett’s frogs, have evolved lower fanglike structures that allow them to inflict puncture wounds on their prey. One species, Guenther’s marsupial frog, has true teeth on both jaws and can eat prey more than half its body length.

Other frogs use their heads to plug the entrance of their burrows as protection from predators. These species tend to have cavernous skulls overlaid with small spikes. A few, such as Bruno’s casque-headed frog, were recently discovered to be venomous. When a predator rams the head of one these frogs, specialized spikes pierce venom glands just under the skin as a defense.

While the study showed a persistent overlap between hyperossification and fanciful skull shape, researchers aren’t sure which came first. Did frogs start eating large prey and then evolve beefier skulls or vice versa?

“That’s kind of a ‘chicken or the egg’ question,” Paluh said.

The common ancestor of today’s 7,000 frog species did not have an ornamented skull. But heavily fortified skulls do appear in even more ancient frog ancestors, said David Blackburn, Florida Museum curator of herpetology and study co-author.

“While the ancestor of all frogs did not have a hyperossified skull, that’s how the skulls of quite ancient amphibian ancestors were built,” he said. “These frogs might be using ancient developmental pathways to generate features that characterized their ancestors deep in the past.”

Previous studies proposed that frogs evolved hyperossification to prevent water loss in dry environments, but Paluh’s research found that habitat and hyperossification were not necessarily linked. The trait shows up in frogs that live underground, in trees, in water and on land.

But habitat does influence skull shape: Aquatic frogs tend to have long, flat skulls, while digging species often have short skulls with pointed snouts, a shape that also enables them to use their mouths like chopsticks to catch small, scurrying prey such as ants and termites, Paluh said. These species include the Mexican burrowing toad and the Australian tortoise frog — distant relatives that live in different parts of the world.

While the study sheds new light on frog skull shape, Blackburn said we still don’t know much about the basic biology of frogs.

“Weirdly, it’s easier for us to generate beautiful images of skulls than it is to know what these frogs eat,” Blackburn said. “Natural history remains quite hard. Just because we know things exist doesn’t mean we know anything about them.”

The study will publish this week in the Proceedings of the National Academy of Sciences.

Be the first to comment on "Skulls Gone Wild: Secrets of How and Why Frogs Evolved Extreme Heads"