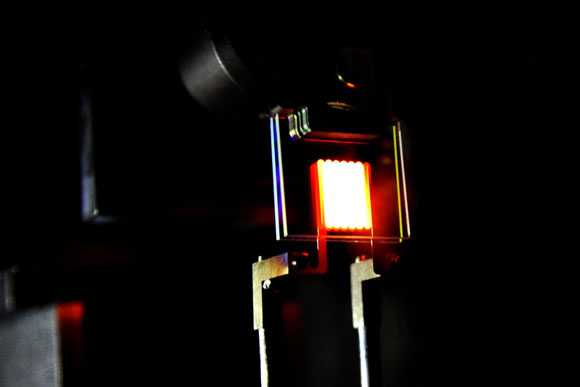 A proof-of-concept device built by MIT researchers demonstrates the principle of a two-stage process to make incandescent bulbs more efficient. This device already achieves efficiency comparable to some compact fluorescent and LED bulbs.

Using a two-stage process that captures heat loss and reflects it back to the filament to be re-absorbed and re-emitted as visible light, engineers from MIT have combined the warm look of traditional light bulbs with 21st-century energy efficiency.

Traditional light bulbs, thought to be well on their way to oblivion, may receive a reprieve thanks to a technological breakthrough.

Incandescent lighting and its warm, familiar glow is well over a century old yet survives virtually unchanged in homes around the world. That is changing fast, however, as regulations aimed at improving energy efficiency are phasing out the old bulbs in favor of more efficient compact fluorescent bulbs (CFLs) and newer light-emitting diode bulbs (LEDs).

Incandescent bulbs, commercially developed by Thomas Edison (and still used by cartoonists as the symbol of inventive insight), work by heating a thin tungsten wire to temperatures of around 2,700 degrees Celsius. That hot wire emits what is known as black body radiation, a very broad spectrum of light that provides a warm look and a faithful rendering of all colors in a scene.

But these bulbs have always suffered from one major problem: More than 95 percent of the energy that goes into them is wasted, most of it as heat. That’s why country after country has banned or is phasing out the inefficient technology. Now, researchers at MIT and Purdue University may have found a way to change all that.

The key is to create a two-stage process, the researchers report. The first stage involves a conventional heated metal filament, with all its attendant losses. But instead of allowing the waste heat to dissipate in the form of infrared radiation, secondary structures surrounding the filament capture this radiation and reflect it back to the filament to be re-absorbed and re-emitted as visible light. These structures, a form of photonic crystal, are made of Earth-abundant elements and can be made using conventional material-deposition technology.

That second step makes a dramatic difference in how efficiently the system converts electricity into light. One quantity that characterizes a lighting source is the so-called luminous efficiency, which takes into account the response of the human eye. Whereas the luminous efficiency of conventional incandescent lights is between 2 and 3 percent, that of fluorescents (including CFLs) is between 7 and 15 percent, and that of most compact LEDs between 5 and 15 percent, the new two-stage incandescents could reach efficiencies as high as 40 percent, the team says.

The first proof-of-concept units made by the team do not yet reach that level, achieving about 6.6 percent efficiency. But even that preliminary result matches the efficiency of some of today’s CFLs and LEDs, they point out. And it is already a threefold improvement over the efficiency of today’s incandescents.

The team refers to their approach as “light recycling,” says Ilic, since their material takes in the unwanted, useless wavelengths of energy and converts them into the visible light wavelengths that are desired. “It recycles the energy that would otherwise be wasted,” says Soljačić.

One key to their success was designing a photonic crystal that works for a very wide range of wavelengths and angles. The photonic crystal itself is made as a stack of thin layers, deposited on a substrate. “When you put together layers, with the right thicknesses and sequence,” Ilic explains, you can get very efficient tuning of how the material interacts with light. In their system, the desired visible wavelengths pass right through the material and on out of the bulb, but the infrared wavelengths get reflected as if from a mirror. They then travel back to the filament, adding more heat that then gets converted to more light. Since only the visible ever gets out, the heat just keeps bouncing back in toward the filament until it finally ends up as visible light.

“The results are quite impressive, demonstrating luminosity and power efficiencies that rival those of conventional sources including fluorescent and LED bulbs,” says Alejandro Rodriguez, assistant professor of electrical engineering at Princeton University, who was not involved in this work. The findings, he says, “provide further evidence that application of novel photonic designs to old problems can lead to potentially new devices. I believe that this work will reinvigorate and set the stage for further studies of incandescence emitters, paving the way for the future design of commercially scalable structures.”

The technology involved has potential for many other applications besides light bulbs, Soljačić says. The same approach could “have dramatic implications” for the performance of energy-conversion schemes such as thermo-photovoltaics. In a thermo-photovoltaic device, heat from an external source (chemical, solar, etc.) makes a material glow, causing it to emit light that is converted into electricity by a photovoltaic absorber.

“LEDs are great things, and people should be buying them,” Soljačić says. “But understanding these basic properties” about the way light, heat, and matter interact and how the light’s energy can be more efficiently harnessed “is very important to a wide variety of things.”

He adds that “the ability to control thermal emissions is very important. That’s the real contribution of this work.” As for exactly which other practical applications are most likely to make use of this basic new technology, he says, “it’s too early to say.”

The work was supported by the Army Research Office through the MIT Institute for Soldier Nanotechnologies, and the S3TEC Energy Frontier Research Center funded by the U.S. Department of Energy.

The Future Of Incandescent Bulbs Not So Bright