By Harvard-Smithsonian Center for Astrophysics October 10, 2021 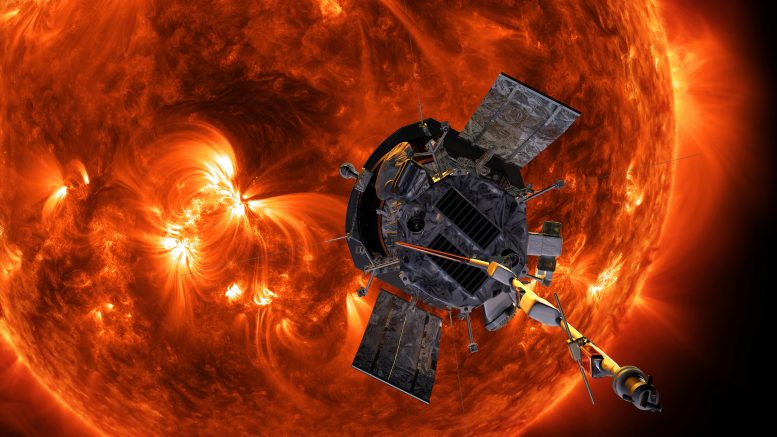 An artist’s rendition of the Parker Solar Probe approaching the Sun. Astronomers have used data from Parker, along with data from other solar missions, to detect and study Solar stream interactions. Credit: NASA/Johns Hopkins APL/Steve Gribben

When a fast solar wind stream erupts from a coronal hole (a cooler region in the Sun’s atmosphere) and overtakes a slower moving solar wind stream, a stream interaction region (SIR) can form. In the SIR, a density “pileup” of compressed plasma develops upstream of the interface; typically there is a peak in pressure followed by a rarefaction region in the fast solar wind component. As the SIR propagates away from the Sun, to distances of one astronomical unit or beyond, the compression can form a shock that efficiently accelerates charged particles. Thus SIRs are a major source of energetic particles in interplanetary space.

Coronal holes, the main sources of the high-speed stream, rotate as the Sun rotates on its axis, and the SIR structures rotate with it. After a complete solar rotation, a SIR is reclassified as a corotating interaction region (CIR). SIRs and CIRs are large-scale, often long-lived structures that, like the solar wind itself, can trigger geomagnetic storms on the Earth and affect its ionosphere and thermosphere.

Additionally, these structures and their associated shocks can modulate the intensity of incoming galactic cosmic rays. SIRs and CIRs vary temporally and spatially, and astronomers are working to understand how they form, evolve, and persist for multiple solar rotations. Doing so requires a robust database of observations at small heliospheric distances together with complementary measurements from other space observatories.

CfA astronomers Anthony Case, Justin Kasper, Kelly Korreck and Michael Stevens and their colleagues used Parker Solar Probe and its SWEAP instrument to identify SIRs and CIRs; SWEAP approaches extremely close to the Sun’s surface, only about four million miles. The team combined the SWEAP results with data from the STEREO-A and Wind solar satellites orbiting farther away.

During five orbits of the Parker Solar Probe, these missions measured and categorized the distances, pressures, magnetic fields, and speeds of eleven SIRs and CIRs, tracking their evolution over the course of almost two years. The goal of this program is to develop a “living catalog” of SIR and CIR events with strict identification criteria.

These results represent the first iteration in a series of observations that will enable case studies of these structures as well as statistical analyses to understand their properties and evolution.