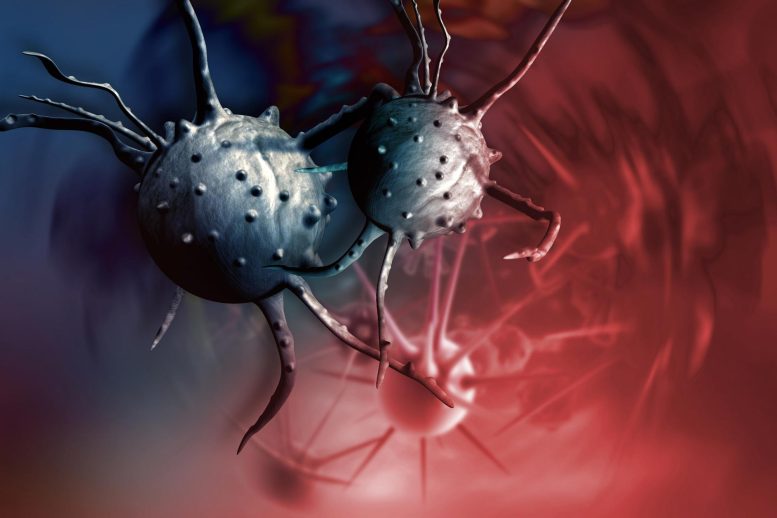 Low mitochondrial content in the cell has been linked to kidney cancer treatment resistance.

The research could be used to develop more targeted kidney cancer drugs.

Researchers from Sweden’s Karolinska Institutet have discovered a connection between reduced mitochondrial content in cells and resistance to treatment for a lethal type of kidney cancer. The cancer cells reacted to the treatment when the researchers used an inhibitor to boost the mitochondrial content. Their research, which was published recently in the journal Nature Metabolism, raises the possibility of more targeted cancer treatments.

In order to create energy for the cell, mitochondria need oxygen. They are the part of the cell that uses the most oxygen as a result. However, it is still unclear how mitochondria adjust to a low-oxygen environment and are related to resistance to cancer treatments.

“We’ve shown for the first time how the formation of new mitochondria is regulated in cells that lack oxygen and how this process is altered in cancer cells with VHL mutations,” says Associate Professor Susanne Schlisio, group leader at the Department of Microbiology, Tumor and Cell Biology, Karolinska Institutet.

Healthy cells are prevented from becoming cancerous by a gene called von Hippel-Lindau (VHL). The 2019 Nobel Prize in Physiology or Medicine was awarded to the discovery that VHL was part of the cell’s oxygen detection system. Normally, VHL breaks down another protein called HIF. Consequently, when VHL is mutated, HIF accumulates and causes a disease called VHL syndrome in which the cells react as if they lack oxygen despite oxygen being present. VHL syndrome greatly increases the risk of tumors, both benign and malignant. VHL syndrome-induced kidney cancer has a poor prognosis, with a five-year survival rate of barely 12%.

In the present study, the scientists examined the protein content of cancer cells from patients with different variants of VHL syndrome, and how they differed from another group of individuals with a special VHL mutation called Chuvash, a mutation involved in hypoxia-sensing disorders without any tumor development. Those with the Chuvash VHL-mutation had normal mitochondria in their cells, while those with VHL syndrome mutation had few.

To increase the amount of mitochondrial content in VHL-related kidney cancer cells, the researchers treated these tumors with an inhibitor of a mitochondrial protease called “LONP1.” The cells then became susceptible to the cancer drug sorafenib, which they had previously resisted. In mouse studies, this combination treatment led to reduced tumor growth.

“We hope that this new knowledge will pave the way for more specific LONP1 protease inhibitors to treat VHL-related clear cell kidney cancer,” says the study’s first author Shuijie Li, a postdoctoral researcher in Schlisio’s team. “Our finding can be linked to all VHL syndromic cancers, such as the neuroendocrine tumors pheochromocytoma and paraganglioma, and not just kidney cancer.”