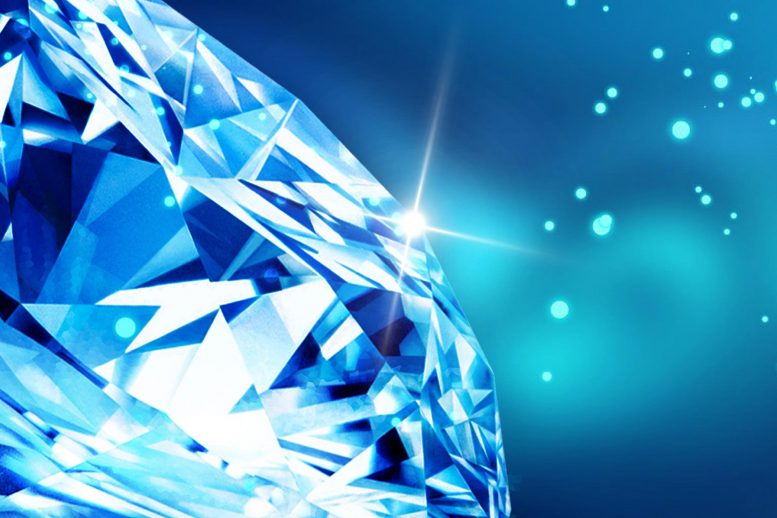 There might be a quadrillion tons of diamonds 100 miles below Earth’s surface. But the farthest we’ve traveled is 7 miles down, so how could we know that?

There’s apparently a quadrillion tons of diamonds 100 miles below Earth’s surface. But we’ve never been that far down, so how do we know there are diamonds there?

We should really start by asking how do we know what’s hundreds of miles below earth’s surface in the first place?

We mostly know because of seismic waves, which are caused by the movement or vibration of the ground in response to forces that are put on it, say by an earthquake or a nuclear explosion. It’s like how jello in a bowl responds when I do this.

There are three major types of seismic waves, primary waves, secondary waves, and surface waves. P and S waves travel through the earth and the speed and direction that they move in tells us a lot about the different materials that are hundreds or thousands of miles beneath us.

P waves travel the fastest, about four miles per second. So they’re picked up by seismometers first. P waves move like an inch worm does, squeezing and expanding as they travel. And they move more quickly through denser, rigid material like rock and metal, but they slow down in liquid.

Scientists realized that once P-waves were reaching a certain depth they were slowing down and then were slightly deflected as they made their way to the other side of our planet, creating what’s called a “P-wave shadow zone”—an area on the side of the Earth opposite the earthquake, where no P-waves could reach.

Later, geophysicist Inge Lehmann hypothesized that there was a liquid zone sandwiched between two rocky layers, which we now call Earth’s mantle and inner core. The liquid layer is Earth’s outer core.

The way S waves move also indicates a liquid outer core. They were about half as fast as P waves and they move in an up and down or side to side motion, changing in shape, depending on the material they move through. Just like P waves, S waves move through different solids at different speeds. And the speed all depends on how rigid the material is.

Unlike P waves, they can’t move through liquid. So they disappear at the mantle core boundary and they don’t show up in this shadow zone again, indicating a liquid layer below a solid one.

So what does this have to do with diamonds? Well, researchers realized that about a hundred miles beneath Earth’s continents in the upper mantle, seismic waves pick up speed. Remember seismic waves move fastest through denser, more rigid material, but the researchers didn’t know what that material could be.

So the researchers tested a bunch of different rock and mineral combinations
to see if any of them could make seismic waves speed up that much. And the one material they found would do it was diamonds, not just a few diamonds about
a quadrillion tons of diamonds embedded in super rigid rocks like eclogites.

So what is it about diamonds that makes them rigid enough for seismic waves to noticeably speed up?

Diamonds are structured arrangements of carbon atoms where each carbon atom is covalently bonded to four other carbon atoms. This is what makes them one of the hardest toughest substances on earth.

I mean, diamond is used to drill through stone, ceramic and bone, and only diamond can be used to polish diamond.

Diamonds form when carbon atoms are put under intense heat and pressure, and Earth’s mantle has temperatures over a thousand degrees Celsius and pressures around 50,000 times that on earth surface.

So finding diamonds there wasn’t a shock, but a quadrillion tons worth definitely was. That’s a whole lot of sparkle.

So how sure are we that that much bling is beneath our feet?

The quadrillion tons of diamonds hypothesis is mostly based on seismic data. So some diamond and geochemistry researchers are still skeptical.

One reason is that during volcanic eruptions, when rock from the mantle is brought up to the surface by magma researchers often only find really small amounts of diamond compared to the amount of rock. I’m talking less than 0.01%.

And other work has shown that the amount of carbon and eclogites those super rigid rocks that I mentioned earlier can really vary from around 0.0003% to around 14% with most having less than 1% diamond.

And you’d need around 3% diamond to get that quadrillion tons.

There’s obviously a lot more work to be done, but that’s how science is by doing research, we keep learning more.

Be the first to comment on "Are We Standing on a Quadrillion Tons of Diamonds? [Video]"