DentalSlim Diet Control is an intra-oral device fitted by a dental professional to the upper and lower back teeth. It is a world-first weight-loss device to help fight the global obesity epidemic. Credit: University of Otago

University of Otago and UK researchers have developed a world-first weight-loss device to help fight the global obesity epidemic.

DentalSlim Diet Control is an intra-oral device fitted by a dental professional to the upper and lower back teeth. It uses magnetic devices with unique custom-manufactured locking bolts. It allows the wearer to open their mouths only about 2mm, restricting them to a liquid diet, but it allows free speech and doesn’t restrict breathing.

Participants in a Dunedin-based trial lost an average of 6.36kg (14 pounds) in two weeks and were motivated to continue with their weight loss journey.

Lead researcher, University of Otago Health Sciences Pro-Vice-Chancellor Professor Paul Brunton says the device will be an effective, safe, and affordable tool for people battling obesity. It is fitted by a dentist, can be released by the user in the case of an emergency and can be repeatedly fitted and removed. 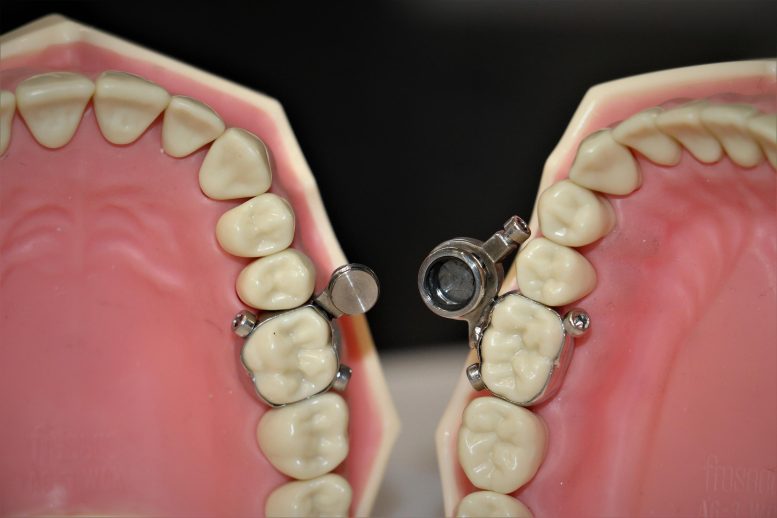 DentalSlim Diet Control is an intra-oral device fitted by a dental professional to the upper and lower back teeth. It is a world-first weight-loss device to help fight the global obesity epidemic. Credit: University of Otago

“The main barrier for people for successful weight loss is compliance and this helps them establish new habits, allowing them to comply with a low-calorie diet for a period of time. It really kick-starts the process,” Professor Brunton says.

“It is a non-invasive, reversible, economical, and attractive alternative to surgical procedures.

“The fact is, there are no adverse consequences with this device.”

“In addition, psychological symptoms may be present, including embarrassment, depression, and loss of self-esteem and obese people may suffer eating disorders together with stigmatization and discrimination,” Professor Brunton says.

The tool could be particularly helpful for those having to lose weight before they can undergo surgery, and for diabetes patients for whom weight loss could initiate remission.

While bariatric surgery plays a major role in the management of morbid obesity, it cannot be relied upon to manage this “global epidemic.” It costs about $24,000 and patients “live with the consequences of that for life, which can be quite unpleasant.”

The practice of surgically wiring people’s jaws shut became popular in the 1980s, but it came with risks; vomiting brought with it the risk of choking, and after 9 to 12 months the patients developed gum disease. In some cases, there were continuing issues with restriction of jaw movement, and some developed acute psychiatric conditions.

“Alternative strategies are required which may obviate surgery, or which reduce weight prior to surgery and so make it easier and safer.

“The beauty of it is that once patients are fitted with the device, after two or three weeks they can have the magnets disengaged. They could then have a period with a less restricted diet and then go back into treatment,” he says.

“This would allow for a phased approach to weight loss supported by advice from a dietician allowing long term weight loss goals to be realized.”

Patients are given a tool to open the device in an emergency, but none of the study participants needed to use it. While they all described the device as tolerable, the design has since been improved, making it smaller to improve functional comfort and aesthetics.

“Overall, people felt better about themselves, they had more confidence and they were committed to their weight loss journey,” Professor Brunton says.

“It’s hard yards. Patients who really want to do this have to be committed. But for those people who are really struggling — and let’s face it, that’s millions of people across the world — this is a way of getting them back into normal lifestyle diet habits by really pump priming the process.

“This could actually help a lot of people.”

The research team consisted of Professor Brunton, Dr. Jithendra Ratnayake, Dr. Peter Mei, and Dr. Arthi Veerasamy, all of the University of Otago, Dr. Jonathan Bodansky, of Leeds, and Dr. Richard Hall, of RMH Consultancy, Leeds. The paper was published in the British Dental Journal.