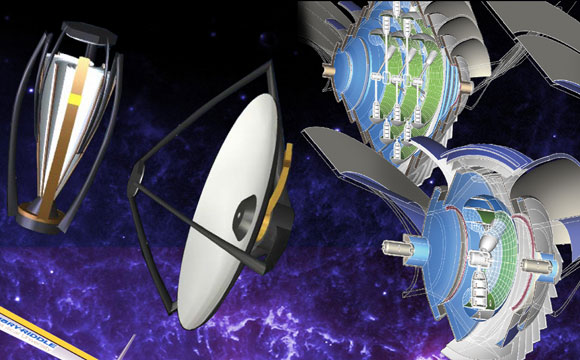 Awards under Phase II of the NASA Innovative Advanced Concepts (NIAC) Program can be worth as much as $500,000 for a two-year study, and allow proposers to further develop concepts funded by NASA for Phase I studies that successfully demonstrated initial feasibility and benefit.

“The NIAC program is one of the ways NASA engages the U.S. scientific and engineering communities, including agency civil servants, by challenging them to come up with some of the most visionary aerospace concepts,” said Steve Jurczyk, associate administrator of NASA’s Space Technology Mission Directorate in Washington. “This year’s Phase II fellows have clearly met this challenge.”

Phase II studies allow awardees to refine their designs and explore aspects of implementing the new technology. This year’s Phase II portfolio addresses a range of leading-edge concepts, including: an interplanetary habitat configured to induce deep sleep for astronauts on long-duration missions; a highly efficient dual aircraft platform that may be able to stay aloft for weeks or even months at a time; and a method to produce “solar white” coatings for scattering sunlight and cooling fuel tanks in space down to 300 °F below zero, with no energy input needed.

The selected concepts are:

NASA selected these projects through a peer-review process that evaluated innovativeness and technical viability.

“Phase II decisions are always challenging, but we were especially challenged this year with so many successful Phase I studies applying to move forward with their cutting-edge technologies,” said Jason Derleth, the NIAC program executive at NASA Headquarters in Washington. “Whether it’s tensegrity habitats in space, new ways to get humans to Mars, delicate photonic propulsion, or any one of the other amazing Phase II studies NIAC is funding, I’m thrilled to welcome these innovations and their innovators back to the program. Hopefully, they will all go on to do what NIAC does best – change the possible.”

All projects are still in the early stages of development, most requiring 10 or more years of concept maturation and technology development before use on a NASA mission.

NIAC is funded by NASA’s Space Technology Mission Directorate, which innovates, develops, tests, and flies hardware for use in NASA’s future missions. Through programs such as NIAC, the directorate is demonstrating that early investment and partnership with scientists, engineers and citizen inventors from across the nation can provide technological dividends and help maintain America’s leadership in the new global technology economy.

For a complete list of the selected proposals, and more information about NIAC, visit: