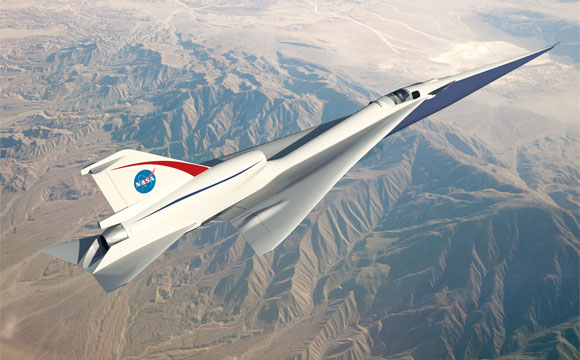 The Quiet Supersonic Technology, or QueSST, concept is in the preliminary design phase and on its way to being one of NASA’s first X-planes.

NASA’s aeronautical innovators are preparing to put in the sky an array of new experimental aircraft, each intended to carry on the legacy of demonstrating advanced technologies that will push back the frontiers of aviation.

History is about to repeat itself.

There have been periods of time during the past seven decades – some busier than others – when the nation’s best minds in aviation designed, built and flew a series of experimental airplanes to test the latest fanciful and practical ideas related to flight.

Individually each of these pioneering aircraft has its own story of triumph and setback – even tragedy. Each was made by different companies and operated by a different mix of government organizations for a myriad of purposes.

Together they are known as X-planes – or X-vehicles, since some were missiles or spacecraft – and the very mention of them prompts a warm feeling and a touch of nostalgia among aviation enthusiasts worldwide.

“They certainly are all interesting in their own way. Each one of them has a unique place in aviation that helps them make their mark in history,” said Bill Barry, NASA’s chief historian. “And they are really cool.”

And now, NASA’s aeronautical innovators once again are preparing to put in the sky an array of new experimental aircraft, each intended to carry on the legacy of demonstrating advanced technologies that will push back the frontiers of aviation.

Goals include showcasing how airliners can burn half the fuel and generate 75 percent less pollution during each flight as compared to now, while also being much quieter than today’s jets – perhaps even when flying supersonic.

NASA’s renewed emphasis on X-planes is called, “New Aviation Horizons,” an initiative announced in February as part of the President’s budget for the fiscal year that begins Oct. 1, 2016. The plan is to design, build and fly the series of X-planes during the next 10 years as a means to accelerate the adoption of advanced green aviation technologies by industry.

“If we can build some of these X-planes and demonstrate some of these technologies, we expect that will make it much easier and faster for U.S. industry to pick them up and roll them out into the marketplace” said Ed Waggoner, NASA’s Integrated Aviation Systems Program director.

It’s something NASA has known how to do going way back to the days of its predecessor organization, the National Advisory Committee for Aeronautics (NACA), and the very first X-plane, fittingly called the X-1, a project the NACA worked on with the then newly formed U.S. Air Force.

Built by Bell Aircraft, the X-1 was the first plane to fly faster than the speed of sound, thus breaking the “sound barrier,” a popular but fundamentally misleading term that spoke more to the romantic notion of the challenges of high speed flight than an insurmountable physical wall in the sky.

As colorfully recounted in books and movies such as “The Right Stuff,” it was Oct. 14, 1947 when Air Force Capt. Chuck Yeager, dinged-up ribs and all, climbed into the bright orange Glamorous Glennis and flew the X-1 into its moment in history.

On that day the Antelope Valley, home to Edwards Air Force Base in California, reportedly echoed with its first sonic boom. But whether or not anyone there actually heard a sonic boom, thousands more echoed over the valley in the decades to come as supersonic flight over the military base became routine.

The X-1 also marked the first in what became a long line of experimental aircraft programs managed by the NACA (and later NASA), the Air Force, the Navy, and other government agencies.

The current list of X-planes that have been assigned numbers by the Air Force stands at 56, but that doesn’t mean there have been 56 X-planes.

Some had multiple models using the same number. And still more experimental vehicles were designed, built and flown but were never given X-numbers. And some X-vehicles received numbers but were never built.

The X-52 was skipped altogether because no one wanted to confuse that aircraft with the B-52 bomber.

Moreover, some X-planes weren’t experimental research planes at all, but rather prototypes of production aircraft or spacecraft, further muddying the waters over what is truly considered an X-plane and what isn’t, Barry said.

“They weren’t necessarily thinking there would be a series of X vehicles at the time of the X-1 because you wound up with several modifications, for example, including the A, the B models – which were very different vehicles in many ways,” Barry said.

Examples of experimental aircraft not called X-planes include some of NASA’s lifting bodies, and the Navy’s D-558-II Skyrocket, which pilot Scott Crossfield flew in 1953 to become the first airplane to travel twice the speed of sound, or Mach 2.

And it gets even more confusing: some of the early X-planes were called the XS-1, XS-2 and so on – the XS being short for “experiment, supersonic.” Although it’s not clearly documented, at some point XS became X, because XS sounded too much like “excess,” as in something you don’t need, Barry said.

There also have been airplanes like the XB-70, a supersonic jet demonstrator considered an X-plane in most circles, but officially not part of the 56 X-planes numbered to date by the Air Force.

“In any case, while the X-plane designation has become a very amorphous term through history, it’s a term that people today now identify as being a cutting edge research sort of plane,” Barry said.

Perhaps of all the X-planes NASA has been associated with, none was more cutting edge and became more famous – rivaling even the X-1 – than the X-15 rocket plane.

“The X-1 was certainly the most historic for being the first and for what it did for supersonic flight. But the X-15 was probably the most productive model of an X-plane,” Barry said.

Flown 199 times between 1959 and 1968, the winged X-15 reached beyond the edge of space at hypersonic speeds, trailblazing design concepts and operational procedures that directly contributed to the development of the Mercury, Gemini, and Apollo piloted spaceflight programs, as well as the space shuttle.

Another component of the X-15 success story beyond its contributions to high-speed aviation, Barry explained, is that it was a great example of collaboration between NASA, the rival military services of the Air Force and the Navy.

“This kind of major aeronautical research, which the X-15 represented, often is best done when several organizations contribute to a common goal,” Barry said. “We’re already seeing that as we prepare to fly this next wave of X-planes.”

But in this age of high-speed computers capable of generating sophisticated simulations, and with the availability of world-class wind tunnels to test high-fidelity models, why still the need to fly something like an X-plane?

The answer has to do with what Waggoner describes as the necessity of a “three legged stool” when it comes to aviation research.

One leg represents computational capabilities. This involves the high-speed super computers that can model the physics of air flowing over an object – be it a wing, a rudder or a full airplane – that exists only in the ones and zeros of a simulation.

A second leg represents experimental methods. This is where scientists put what is most often a scale model of an object or part of an object – be it a wing, a rudder or an airplane – in a wind tunnel to take measurements of air flowing over the object.

“Each of these is great on its own and each helps the other, but each also can introduce errors into the inferences that might be made based on the results,” Waggoner said. “So the third leg of the stool is to go out and actually fly the design.”

Whether it’s flying an X-plane or a full-scale prototype of a new aircraft, the data recorded in actual flight can then be applied to validate and improve the computational and experimental methods used in developing the design in the first place.

“Now you’ve got three different ways to look at the same problem,” Waggoner said. “It’s only through doing all that together that we will ever get to the point where we’ve lowered the risk enough to completely trust what our numbers are telling us.”

Although it may not wind up being the first of the New Aviation Horizons X-planes to actually fly as part of the three-legged stool of research, design work already has begun on QueSST, short for Quiet Supersonic Technology

A preliminary design contract was awarded in February to a team led by Lockheed Martin. If schedule and congressional funding holds, this new supersonic X-plane could fly in the 2020 timeframe.

QueSST aims to fix something the X-1 first introduced to the flying world nearly 70 years ago – the publicly annoying loud sonic boom.

Recent research has shown it is possible for a supersonic airplane to be shaped in such a way that the shock waves it forms when flying faster than the speed of sound generate a sonic boom so quiet it hardly will be noticed by the public, if at all.

The resulting sonic “boom” has variously been described as like distant thunder, the sound of your neighbor forcefully shutting his car door outside while you are inside, or as the thump of a “supersonic” heartbeat.

“We know the concept is going to work, but now the best way to continue our research is to demonstrate the capability to the public with an X-plane,” said Peter Coen, NASA’s supersonic project manager.

It is hoped data gathered from flying QueSST will help the Federal Aviation Administration and its international counterparts establish noise-related regulations that will make it possible for commercial supersonic airliners to fly over land across country.

“Providing that data will be a key step in bringing accessible and affordable supersonic flight to the traveling public,” Coen said.

Meanwhile, other experimental aircraft also are under consideration, including those with novel shapes that break the mold of the traditional tube and wing airplane, and others that are propelled by hybrid electric power.

Exactly what these X-planes will look like, how they will be operated and where they will be flown all have yet to be precisely defined.

“We’re going to let the marketplace and the community help us inform our decisions on the direction we want to go,” Waggoner said. “But we’re really excited about all of the things we might demonstrate.”

Interestingly, despite these future test aircraft being referred to as X-planes, it is entirely possible only some of them will actually get an official X-plane number designation – or perhaps none of them will.

“We just don’t know yet,” Waggoner said. “That decision likely won’t take place for each aircraft until we’re about to award the construction contract.”

So whether NASA winds up calling these new planes by an X-number or a catchy acronym – or both – one thing is clear: NASA’s flight research program is on its way to creating a renaissance of an exciting era in aviation research.