The Ebolavirus was first described in 1976 during the Zaire ebolavirus outbreaks in Africa. It’s one of the most lethal viruses on Earth, and it’s part of the Filoviridae family that includes Ebolavirus and Marburgvirus. Recent taxonomic updates have changed the way that we refer to these viruses, but they remain just as deadly, since once patients are infected, they develop severe hemorrhagic fever that has a fatality rate of almost 90% in some cases, which is the case in the Zaire ebolavirus variant. There have been several epidemics of this disease, and many people have died of it, mainly in Zaire, Sudan, Congo, and Uganda. There have also been some fatalities because laboratory accidents. Ebolavirus is one of a handful of viruses that needs to be contained in Level 4 Biohazard facilities, necessitating positive pressure personnel suits, with segregated air supplies. 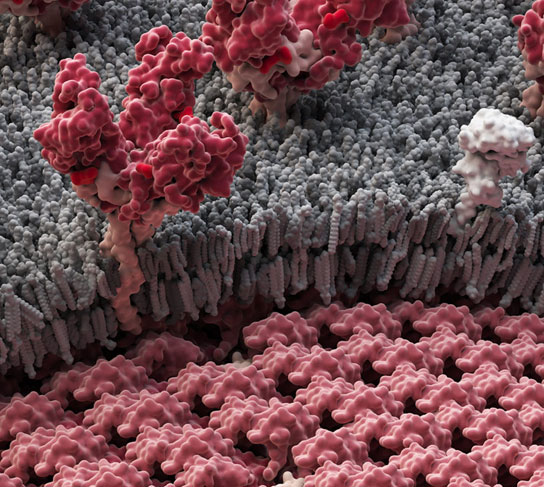 In this 3D model that was presented in a study, Ebola-encoded structures are shown in maroon and structures from human cells are shown in gray. The model is based upon X-ray analysis, NMR spectroscopy, and general virology data that have been published in studies over the last two decades. Some protein structures were elaborated using a predictive computer biology algorithm, including molecular modeling. This intricate model includes 11 types of Ebolavirus and human proteins, 18,900 nucleotides of genomic RNA and more than 2.5 million different lipid molecules. Ebolavirus are deadly because they cause severe hemorrhagic fever, infecting the capillary endothelium and several types of immune cells.