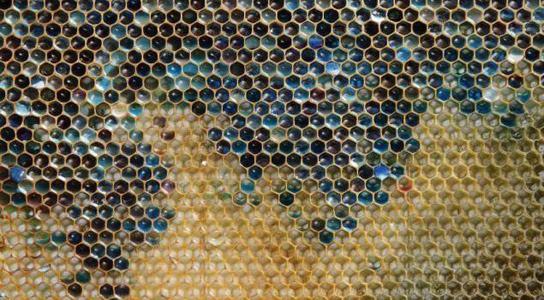 A colored honeycomb from a beehive is seen in Ribeauville near Colmar Eastern France. By Vincent Kessler/Reuters

Bees in a cluster of beehives in northeastern France have been making honey in shades of blue and green, alarming beekeepers and leaving scientists to discover the reason for the occurrence. It’s now been determined that the bees have developed a taste preference for the residue from containers of the candy M&M’s processed at a nearby plant.

Since August, beekeepers around the town of Ribeauville have been discovering that their hives are carrying unidentified colorful substances, which turned their honey into unnatural shades of blue and green. French apiarist Andre Frieh holds a sample of honey (L) besides colored ones at his home in Ribeauville near Colmar Eastern France, October 5, 2012, by Vincent Kessler/Reuters

The investigation led them to blame a biogas plant, situated 2.5 miles away, which has been processing waste from a Mars plant producing M&M’s. The resulting honey is unsellable and has affected dozens of beekeepers in the region, which are already dealing with high bee mortality rates and dwindling honey supplies following a harsh winter.

The company operating the biogas plant, Agrivalor, has tried to address the problem after being notified by the beekeepers. The company now cleans its containers and incoming waste is now stored in a covered hall. Mars operates a chocolate factory near Strasbourg, 62 miles away.

France is one of the largest honey producers within the European Union, and releases 18,330 tons annually. Ribeauville has been best known for its vineyards, but there are about 2,400 beekeepers in Alsace who tend to 35,000 bee colonies and produce about 1,000 tons of honey per year. Bees at a cluster of beehives in northeastern France have been producing honey in mysterious shades of blue and green, by Vincent Kessler/Reuters