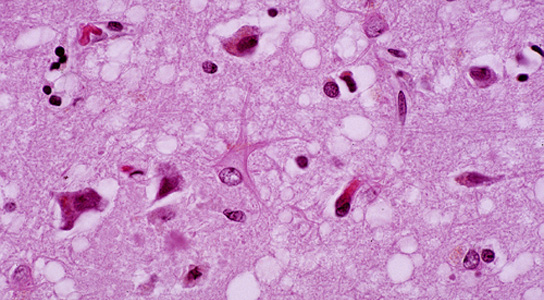 A new study published in Science shows that prion diseases, such as bovine spongiform encephalopathy (BSE) and variant Creutzfeldt-Jakob disease (vCJD), are able to jump species a lot easier than previously thought, because they can replicate in the spleen without necessarily affecting the brain.

Thousands of silent carriers of prion diseases in the UK might potentially pass these onto others through surgery or blood transfusions. Prions are infectious pathogens, composed of the misfolded protein PrP. Normal PrP molecules can be converted into prions and aggregate in the brain to form hard, insoluble clumps. Previous studies have shown that these diseases have a hard time jumping species; however, these studies focused on the brains. Since prions can replicate in the spleen, tonsils, and appendix, there could be other vectors of infection.

Vincent Béringue, a prion researcher at the French National Institute for Agricultural Research in Jouy-en-Josas, France, et al. used mice that had been genetically engineered to express the sheep or human versions of PrP. They injected prions from elk, hamsters, and cattle into the brains of mice. Those species barriers are supposed to be hard to cross. As expected, very few mice had detectable prions in their brains. However, more than half of the mice had prions in their spleens, even though they didn’t show any clinical symptoms of BSE.

If extrapolated to the human population, these kinds of prion carriers could potentially infect others by blood transfusions, organ donations, or contaminated surgical instruments. Once in the brain, the prions could cause lethal vCJD.