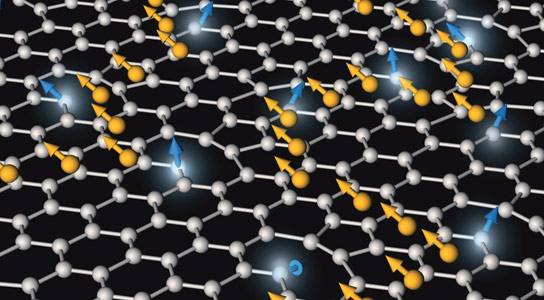 Scientists from the University of Manchester have shown for the first time that magnetic clouds in graphene can be controllably dissipated and then condensed back, allowing researchers to work towards transistor-like devices in which information is written down by switching graphene between its magnetic and non-magnetic states.

In a report published in Nature Communications, a University of Manchester team led by Dr Irina Grigorieva shows how to create elementary magnetic moments in graphene and then switch them on and off.

This is the first time magnetism itself has been toggled, rather than the magnetization direction being reversed.

Modern society is unimaginable without the use of magnetic materials. They have become an integral part of electronic gadgets where devices including hard disks, memory chips and sensors employ miniature magnetic components. Each micro-magnet allows a bit of information (‘0’ or ‘1’) to be stored as two magnetization directions (‘north’ and ‘south’). This area of electronics is called spintronics.

Despite huge advances, a big disappointment of spintronics has so far been its inability to deliver active devices, in which switching between the north and south directions is done in a manner similar to that used in modern transistors. This situation may dramatically change due to the latest discovery.

Graphene is a chicken wire made of carbon atoms. It is possible to remove some of these atoms which results in microscopic holes called vacancies. The Manchester scientists have shown that electrons condense around these holes into small electronic clouds, and each of them behaves like a microscopic magnet carrying one unit of magnetism, spin.

Dr Grigorieva and her team have shown that the magnetic clouds can be controllably dissipated and then condensed back.

She explains: “This breakthrough allows us to work towards transistor-like devices in which information is written down by switching graphene between its magnetic and non-magnetic states. These states can be read out either in the conventional manner by pushing an electric current through or, even better, by using a spin flow. Such transistors have been a holy grail of spintronics.”

Dr Rahul Nair, who led the experimental effort, comments “Previously, one could only change a direction in which a magnet is magnetized from north to south. Now we can switch on and off the magnetism entirely.

“Graphene already attracts interest in terms of spintronics applications, and I hope that the latest discovery will make it a frontrunner.”

Nobel Laureate and co-author of the paper Professor Andre Geim added: “I wonder how many more surprises graphene keeps in store. This one has come out of the blue. We have to wait and see for a few years but the switchable magnetism may lead to an impact exceeding most optimistic expectations.”

Professor Antonio Castro Neto, Director of the Graphene Research Center in Singapore and co-author of the report, said: “This work opens the doors for new magnetic devices that are atomically thin and can be easily controlled externally with the application of ordinary electric fields. These new devices can be incorporate in electronic circuits in order to create functionalities for control of magnetism and charge that did not exist before. They unify magnetic memories with electric circuits. It is a true breakthrough.”

Be the first to comment on "Researchers Control Magnetic Clouds in Graphene, Switch Magnetism On and Off"