In her debut book How You Say It, UChicago psychologist Katherine D. Kinzler explores how we interpret language to divide the world into social groups.

In new book, Prof. Katherine D. Kinzler argues that how you speak reflects who you are.

Have you ever considered that the way you talk may determine who you’re friends with, the job you have, and how you see the world? Even if you don’t realize it, “how you speak is, in a very real way, a window into who you are and how other people see you.” 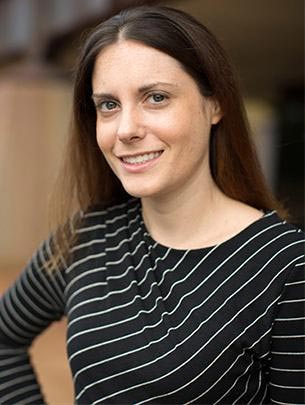 That’s the argument University of Chicago psychologist Katherine D. Kinzler explores in her first book, How You Say It: Why You Talk the Way You Do—And What It Says About You, which was published on July 21. Described by one reviewer as “an articulate examination of an underrecognized aspect of human communication,” the book highlights the immense power of speech, and explores how speech underpins all facets of social life.

A leading developmental psychologist, Kinzler’s book analyzes speech from early childhood to adult life—especially how children think about language to divide the world into groups and find social meaning. “Language is so personal to people,” said Kinzler, a professor in UChicago’s Department of Psychology. “The way you speak can be such an essential part of your identity, so I wanted the book to reach people for whom it would really have impact, including beyond an academic impact.”

In the following Q&A, Kinzler talks more about the impact of speech in daily life and how discrimination based on speech acts as another form of prejudice.

You write in the book’s introduction that it’s not exactly what one says, but how they say it that gives immense power to speech. Do you think the way we speak determines how social life plays out?

I do. That was also a motivation for writing the book: that the way we speak is such a powerful force in our lives, and people are often unaware of that. It’s both so critical for the people we connect with, but then it also has tremendous power for those whom we don’t get along with and for people we are prejudiced against. I believe that at more societal and institutional levels there’s a bias against what’s perceived as non-standard speech that’s kind of baked in. People also aren’t aware of how hard it can be to feel marginalized based on their speech, and we need to become aware of this.

“The way you speak can be such an essential part of your identity, so I wanted the book to reach people for whom it would really have impact.”

You also discuss racial discrimination based on speech—for example, the negative views of African American English. Can you talk a bit more about that?

Prejudice against speech is something that people aren’t always talking about, but it’s absolutely there. One arm of racism is saying that African American English isn’t as good as other dialects of American English, when no dialect of English is good or bad, or better or worse. That’s an example of how we don’t reflect on speech in our lives and the role of speech prejudice. I recommend checking out the profound work of Asst. Prof. Sharese King in the Department of Linguistics here at UChicago––she and I just published an op-ed together in the Los Angeles Times about the underappreciated role of speech in racial justice that people need to consider. If we’re having a broader conversation about understanding privilege and marginalization, speech should be part of the conversation.

Where does this kind of speech discrimination come from?

Parents and educators have a lot of impact on the categories that their kids learn. One example I talk about a bit in the book is the usage of gender categories. Even if it’s done in a seemingly benign way—like teachers saying “boys and girls line up” at school—if you take a look, you likely find that gender is labeled constantly to kids. Because it is being continually verbally marked and labeled, it can make kids think that gender is a bigger category than they would have thought otherwise. So, then from that, they say to themselves, “Oh, this is a really big deal. What is it about gender that is such a big deal?” Then they look into the world, and they observe a lot of gender stereotypes and can think that those stereotypes are causally responsible for gender categories.Likewise, at home, parents might say something like, “We like Muslims! Muslims are nice!” Something like that sounds positive, but in general when you’re referring to a whole category of people, it actually can backfire. It’s better when you can talk about people as individuals rather than massing over an entire category of people. It’s really easy for stereotypes to take off when you think about a group of people being all the same. In terms of the ways that our accents work, you can make these split-second judgments of someone when you meet them—even if you’re not necessarily aware. For instance, in Montreal in the 1960s, it was a time with social discord across linguistic groups, where English-speaking Canadians (as compared to French-speaking Canadians) held a lion’s share of the economic opportunity. Experimental linguistics studies would present people with voices, and from their evaluations you could measure their linguistic prejudice (even if they wouldn’t admit it explicitly). English Canadians would hear somebody speaking English and think, “Oh, that person sounds a lot smarter, taller and nicer than the person speaking French,” but it was actually a bilingual voice recording both languages. Even French speakers would often say the English voices sounded higher in status.

So when you hear someone speak for even a split second, you may get information that may not be real about the individual, but are actually about cultural attitudes that have infused your evaluation. In this way, stereotypes about groups of people can easily lead to prejudice against individuals.

Part of your book discusses how teaching children from a very young age about multilingualism can expand our linguistic circles and help tear down these stereotypes about accents and language. Do you think this is the solution of reducing linguistic bias overall, or is it at least a step in the right direction?

It would be nice if it was a perfect solution, but there are plenty of places in the world that are both multilingual and have war and conflict. So this is not a panacea. That said, I also believe there is good evidence that being in a multilingual environment—and in an environment that has and values diversity more generally—has positive influences on kids’ development, and allows them to think from different perspectives and think outside the box. So in general, I do think exposure to linguistic diversity early on is a really big positive for kids.

“If we’re having a broader conversation about understanding privilege and marginalization, speech should be part of the conversation.”

How has speech discrimination factored into how different individuals have experienced the coronavirus pandemic?

Disparities in healthcare are a tremendous issue in our nation, based racial and ethnic lines. There is a study by my UChicago Psychology colleague Boaz Keysar and others showing miscommunications breakdowns in the health care context. In general, communication isn’t this perfect system; there is plenty of room for error. This can be especially challenging when people communicate across languages. Plus, there is research showing that people aren’t always aware when in a communicative context they shut down and stop listening because they don’t like the way someone speaks. Health care is so critical—particularly in the current moment––and we need to be really mindful and weary of miscommunication. So, I think recognizing language diversity in this context is extremely important.

Is your goal for the book to inspire those kinds of changes?

Absolutely. My goal is to get the social role of speech in our lives on our minds. We need a shift in our understanding of the prominence of language and its importance for a range of different social interactions. In the book, I talk about how there aren’t always sufficient employment protections for people who speak in non-standard ways. There’s also evidence for discrimination based on speech in housing markets. When we think about economic opportunities, there’s so much evidence that speaking in a way that’s considered non-native or non-standard can constrain the economic opportunities that people may have. So if we’re thinking about a recession in particular—and about jobs that require virtual communication, which can be harder than face-to-face communication—taking into consideration the social psychology of language is going to be important.

25 Comments on "How You Speak Reflects Who You Are: The Way We Talk Both Unites and Divides Us"