The surprising results of a decade-long investigation by Alessandro Vezzosi and Agnese Sabato provide a strong basis for advancing a project researching Leonardo da Vinci’s DNA.

Their extensive study, published by the journal “Human Evolution” (Pontecorboli Editore, Florence), documents with new certainty the continuous male line, from father to son, of the Da Vinci family (later Vinci), from progenitor Michele (born 1331) to grandson Leonardo (6th generation, born 1452) through to today — 21 generations in all, including five family branches — and identifies 14 living descendants. 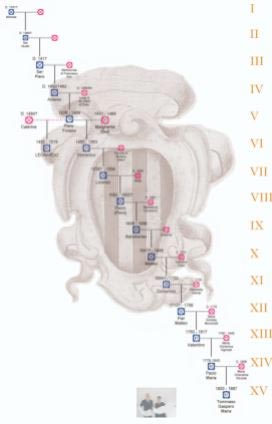 This text deepens and enormously expands the discovery announced in Vinci, Italy, in 2016 by the same Vezzosi and Sabato of numerous living but indirect descendants including only two males in direct line, up to the 19th generation, from a single branch of the Vinci family.

It also provides for the first time the documentary data and information sources over seven centuries to the present day registry office, with work on additional family branches ongoing.

Leonardo himself had at least 22 half-brothers but no children; a new unpublished document shows that “Paolo di Leonardo da Vinci da Firenze” was a case of homonymy. The five family branches are traced from Leonardo’s father, ser Piero (5th generation), and half-brother Domenico (6th). Since the 15th generation, data have been collected on over 225 individuals. The study, with the collaboration of the living descendants, contributes to the work of the Leonardo Da Vinci Heritage Association.

This extraordinary, authoritative 690-year genealogical investigation is fundamental to affiliated scientific work Vezzosi and Sabato have underway with the international Leonardo da Vinci DNA project, supported by The Richard Lounsbery Foundation. The project involves the J. Craig Venter Institute of La Jolla, California and several other high-profile universities and research centers, including the Department of Biology of the University of Florence, directed by David Caramelli.

The Y chromosome, passed on to male descendants, is known to remain almost unchanged through 25 generations. Comparing the Y chromosome of today’s male relatives with that of their ancestors in ancient and modern burial sites would both verify the uninterrupted family line and certify Leonardo’s own Y chromosome marker. Questions potentially probed once Leonardo’s DNA is confirmed include reasons behind his genius, information on his parents’ geographical origins, his physical prowess, premature aging, left-handedness, diet, health and any hereditary diseases, and his extraordinary vision, synaesthesia and other sensory perceptions.

Comparison of biological data could also potentially help verify the authenticity of artwork and materials handled by Leonardo, thereby pioneering links between biology and art with broad implications for the world’s art market in terms of artistic attribution and materials.

Reference: “The New Genealogical Tree of the Da Vinci Family for Leonardo’s DNA. Ancestors and descendants in direct male line down to the present XXI generation” by Alessandro Vezzosi and Agnese Sabato, 4 July 2021, Human Evolution.
DOI: 10.14673/HE2021121077

Leonardist and art historian. He is originally from Vinci, where he founded the Leonardo Da Vinci Ideal Museum in 1993, with the Archives of fingerprints and Leonardisms, and with the project for “Leonardo’s Garden”. He is the author and curator of countless exhibitions, publications, conferences and lectures on Leonardo, as well as on Michelangelo and Raphael, the Garden of Pratolino, “and places of memory, contemporary art and design, from the United States to Japan.

His books have been translated into 19 languages ??(from Leonardo da Vinci: The Mind of the Renaissance, New York, Harry N. Abrams, 1997 to Leonardo Da Vinci: The Complete Paintings in Detail, New York, Prestel, 2019).

He began in 1973 the research on the locations and spaces and descendants of Leonardo, for what has been configured since 2000 as a search for Leonardo’s DNA.

Agnese Chairs the Leonardo Da Vinci Heritage Association. She graduated in Modern History from the University of Florence. She collaborates in the organization of exhibitions, conferences, educational activities and institutional initiatives of the Leonardo Da Vinci Ideal Museum (including the “Fingerprint Archive”), and in books and study notebooks. She has published contributions on the history of slaves in Florence and on the myth and image of Leonardo. She has been working since 1993 researching the genealogy and living descendants of the Da Vinci, in collaborations with the Leonardo Da Vinci DNA Project since 2015.

The Association aims to protect and enhanceLeonardo’s cultural heritage and the spaces and locations related to his life and work. Born as an idea in 2017, the non-profit (Third Sector) Leonardo Da Vinci Heritage Association was established formally in January 2019 to spread in Italy and abroad the knowledge of Leonardo’s life – through research, publishing and exhibition activities; strengthen research, dissemination, documentation and information activities on his life story, with particular reference to the genealogy of his family; safeguard the privacy of his descendants; to promote studies, research and scientific examinations relating to the DNA of Leonardo and his relatives; safeguard his moral and ethical heritage, while respecting and protecting his cultural heritage.

The project is curating creation of the “GeniaDaVinci” database, which will collect the thousands of documents collected for this study and the family tree in progress, to make them accessible to scholars and the general public.

A volume of the new paper in Italian will be published soon with full iconography.

Founded by anthropologists Brunetto Chiarelli and Henry de Lumley in 2014, goals of the project include obtaining and sequencing DNA of Leonardo to understand better his extraordinary talents, notably his visual acuity, through genetic associations. Three-dimensional images of Leonardo could possibly be created if sufficient genome sequence data becomes available.

Completed pilot studies confirm the ability to identify useful biological material from centuries old works of art and other kinds of relics and samples. The project also investigates the microbial flora located on and within artworks. Using 16S sequencing, the project has demonstrated a novel finding that there are differing bacterial communities when comparing artwork on wood and canvas, and microbes on stone/marble/plaster sculptures. It has also demonstrated that there are specific genera known for having oxidative positive strains present on paintings on wood and paintings on canvas that could potentially be responsible for deterioration and fading. More generally the Project seeks to stimulate fruitful interactions between, on the one hand, geneticists, molecular biologists, and microbiologists, and, on the other hand, historians, art historians, artists, and other experts in cultural heritage.

Funding for this project is provided by The Richard Lounsbery Foundation. Related news release: here.