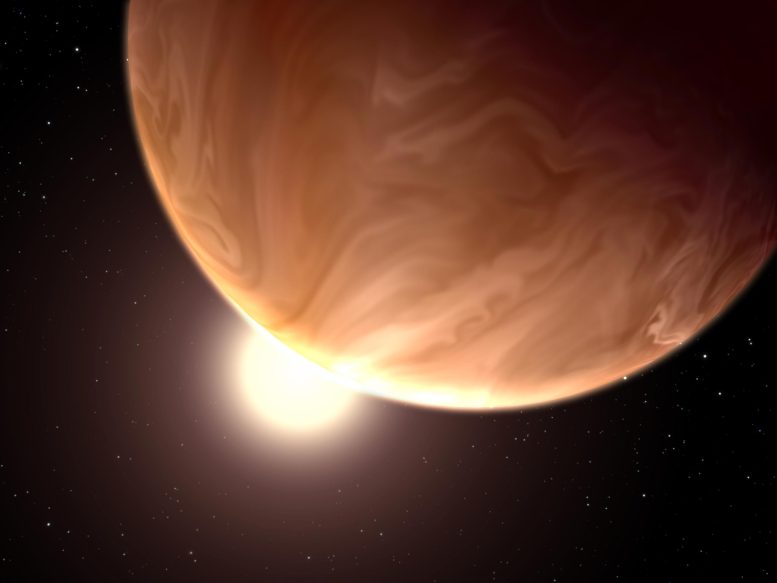 This is an illustration of the hypothetical appearance of the exoplanet GJ 1214b, which is known as a “super-Earth” type planet because it is slightly more than six Earth masses. Spectroscopic observations with NASA’s Hubble Space Telescope provide evidence of high clouds blanketing the planet. These clouds hide any information about the composition and behavior of the world’s lower atmosphere and surface. The composition of the clouds is unknown. GJ1214b is located 40 light-years from Earth, in the constellation Ophiuchus. Credit: Artwork: NASA, ESA, and G. Bacon (STScI); Science: NASA, ESA, L. Kreidberg and J. Bean (University of Chicago), and H. Knutson (California Institute of Technology)

Using the Hubble Space Telescope, astronomers probed the atmosphere around the transiting super-Earth known as GJ1214b and concluded that unless the atmosphere has a thick top layer of clouds obscuring our view, its probable composition includes abundant water vapor.

A “super-Earth” is an exoplanet (a planet around another star) whose mass is between about two and ten Earth masses. Planets larger than this are closer to Uranus and Neptune in size (and perhaps in other physical properties as well). The category of “super-Earth” currently refers only to the mass of the object, and not to its radius, its orbital distance from the star, its surface temperature, or its atmospheric properties, although naturally astronomers are working hard to identify super-Earths that might offer clues about the Earth in these features. Of the 576 exoplanets whose basic parameters are currently approximately known, there are 36 in the super-Earth category. Four CfA astronomers, Zachory Berta, David Charbonneau, Jean-Michel Desert, and Jonathan Irwin, together with six colleagues, used the Hubble Space Telescope to probe the atmosphere around the transiting super-Earth known as GJ1214b. This exoplanet has a mass of 6.5 Earth-masses and a radius of 2.7 Earth-radii, and it orbits a small M-dwarf star (its diameter is only 21% of the Sun’s). They used the Hubble infrared spectrometer to observe the planet as it transited across the face of the star; as it did so, the planet’s atmosphere absorbed light from the star, thus subtly altering the star’s intrinsic spectrum as we observe it. The intrinsic spectrum itself was carefully measured and subtracted after the transit.

Earlier models tried to predict what the atmosphere of this super-Earth might contain, based on ground-based transit spectra of it and on our current knowledge of the atmospheres of the planets in the solar system. For example, an atmosphere dominated by molecular hydrogen is one possibility; this is the situation in Jupiter. But measurements made in three separate transits found no evidence for this scenario – nor were they consistent with an equilibrium atmosphere composed of elements whose relative abundances are those of the average solar system. Instead, the astronomers concluded that, unless the atmosphere has a thick top layer of clouds obscuring our view, its probable composition includes abundant water vapor. Probing the atmosphere around a planet orbiting a star 42 light-years away is a remarkable achievement and an early step. Future observations of this and other transiting exoplanets will tell us more about the atmospheres of exoplanets, and lead to a better understanding of how atmospheres form, evolve, and behave under a wide range of physical conditions.

Hubble Reveals GJ1214b is a Waterworld Enshrouded by a Steamy Atmosphere